Dave Barry Hits Below the Beltway 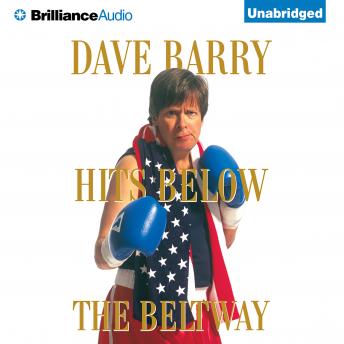 Understanding the urgent need for a deeply thoughtful, balanced book to explain our national political process, Dave Barry has not even come close. Though he himself has covered many campaigns, run for president several times, and run for cover at the rainy inauguration of George W. Bush (the man will spare nothing for his art), Barry has instead outdone himself.Below the Beltway includes Barry's stirring account of how the United States was born, including his version of a properly written Declaration (When in the course of human events it behooves us, the people, not to ask 'What can our country do for us, anyway?' but rather whether we have anything to fear except fear itself) and a revised Constitution (Section II: The House of Representatives shall be composed of people who own at least two dark suits and have not been indicted recently).Dave also cracks the income-tax code and explains the growth(s) of government, congressional hearing difficulties, and the persistent rumors of the influence of capital in the Capitol. Among other civic contributions, his tour of Washington D.C. should end school class trips forever.

Dave Barry Hits Below the Beltway