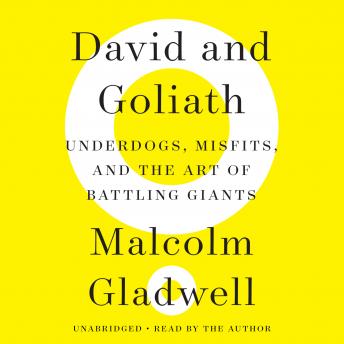 David and Goliath: Underdogs, Misfits, and the Art of Battling Giants

Explore the power of the underdog in Malcolm Gladwell's dazzling examination of success, motivation, and the role of adversity in shaping our lives, from the bestselling author of The Bomber Mafia.

Three thousand years ago on a battlefield in ancient Palestine, a shepherd boy felled a mighty warrior with nothing more than a stone and a sling, and ever since then the names of David and Goliath have stood for battles between underdogs and giants. David's victory was improbable and miraculous. He shouldn't have won.

Or should he have?

In David and Goliath, Malcolm Gladwellchallenges how we think about obstacles and disadvantages, offering a new interpretation of what it means to be discriminated against, or cope with a disability, or lose a parent, or attend a mediocre school, or suffer from any number of other apparent setbacks.

Gladwell begins with the real story of what happened between the giant and the shepherd boy those many years ago. From there, David and Goliath examines Northern Ireland's Troubles, the minds of cancer researchers and civil rights leaders, murder and the high costs of revenge, and the dynamics of successful and unsuccessful classrooms—all to demonstrate how much of what is beautiful and important in the world arises from what looks like suffering and adversity.

In the tradition of Gladwell's previous bestsellers—The Tipping Point, Blink, Outliers and What the Dog Saw—David and Goliath draws upon history, psychology, and powerful storytelling to reshape the way we think of the world around us.

This book is a must read. You will learn so much.

the narrator was very good excellent speaker I could not have gotten to this book and listen to someone else as easy as it was with listening to him. I was recommended by a very good friend of mine about the book and I can really see why this was one of her favorites. I'm about to start listening to another one and I look forward to this website for many more to come thank you.

Excellent book! Greatly enjoyed it and highly recommend it.

Excellent book on how people who are shackled with setbacks over come them and use them to over achieve . It was uplifting and incredibly comprehensive historically .

This is the best book I've read or heard all year. Have recommended to several people.

Awesome book showing how the difference between a good life and a bad life is sometimes just a matter of perception.

He did it again!!! Amazing!! Extremely thought provoking!

Fascinating book about how the little guy isn't always at a disadvantage. As usual, Gladwell turns conventional thinking on its head in a compelling, hard-to-put-down read. I finished this in one day!