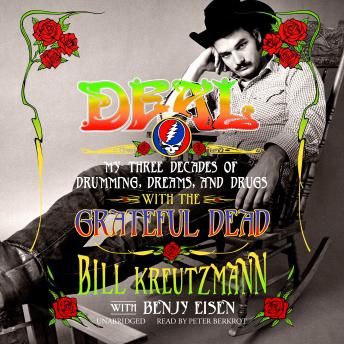 Deal: My Three Decades of Drumming, Dreams, and Drugs with the Grateful Dead

On their fiftieth anniversary comes a groundbreaking rock-and-roll memoir by one of the founding members of the Grateful Dead.

The Grateful Dead are perhaps the most legendary American rock band of all time. For thirty years, beginning in the hippie scene of San Francisco in 1965, they were a musical institution, the original jam band that broke new ground in so many ways. From the music to their live-concert sound systems and fan recordings, they were forward-thinking champions of artistic control and outlaw artists who marched to the beat of their own drums.

Bill Kreutzmann, one of their founding members and drummer for every one of their over 2,300-dd concerts, has written an unflinching and wild account of playing in the greatest improvisational band of all time. Everything a rock music fan would expect is here, but what sets this apart is Bill’s incredible life of adventure, which was at the heart of the Grateful Dead experience. This was a band that knew no limits, and Bill lived life to the fullest, pushing the boundaries of drugs, drums, and high times, through devastating tragedy and remarkable triumph.

But at this book’s beating heart is the music—theirs and others. Some of the greatest musicians and concerts were a part of the Grateful Dead’s career, from sharing the stage with Janis Joplin, Bob Dylan, and the Who, to playing in the Acid Tests, the Monterey Pop Festival, Woodstock, and Altamont. Bill’s life is a chronicle of American music and pop-culture history, and his epic personal journey is one of sonic discovery and thrilling experiences.

Good information about the history of the Dead. Kruetzmann jumps around a bit on his timeline but all in all I got a good picture of the genesis of the band. Great entertainment . The narrator was contrived at times. Way to groovy. His delivery was annoying. I found the chronology of the band and their early formation fascinating having seen them a few times in the middle 70's at Winterland. Fully electric just like the band every time. This was post Pigpen McKernen. This book filled in a lot of gaps. Wonderful journey overall despite the narrator.

Good narrative. I was always curious of Bill

I enjoyed it a lot. Lots of emotions and history and the ending was a surprise. I was impressed with the narrator.

Awesome audiobook for any fan of the band. Seriously i could listen to it feom start to finish!!!

The narrator was annoying to me at first, but he was an actor who kept it lively, once I got used to his take on the character of Bill, I was acclimated and enjoyed it.

This title is due for release on June 26, 2015
We'll send you an email as soon as it is available!