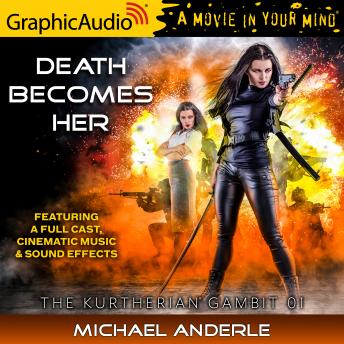 There is more in our world than you know. Deep in the darkness of a government building, one man needs to find the perfect solution to a vampire’s request that the government satisfy the debt of honor owed him. If he falls short, the failure will be paid in the blood of the military.

He needs three uniquely qualified individuals. He can find only one. One woman, dying, might be the ace-in-the-hole he needs to appease the Vampire. But then, she might also be the one person needed to save humanity. If she is accepted, will she willingly change? If she is willing to change, will she pass the turning? If she survives the turning, will she be powerful? If she is powerful, what will she do to those who will now want her dead? The universe might forever be changed in her wake.

What you thought you knew about Vampires and Werewolves is wrong...so very, very, wrong.

Death Becomes Her and the rest of the Kurtherian Gambit Series is wonderful. Finding out that they started putting the series into a dramatized version with complete cast, music, and sound effects was basically a no brainer for me to purchase. After listening to most of it I purchased and downloaded books 3 & 4 in the series, not sure why book 2 isn't available or if I simply can't find it on this particular site is something that I will be looking for. The action and humor and the very creative cursing in this series is wonderful and I can say that I have found myself laughing out loud at many times while listening to this dramatization! If your a fan of supernatural type books I highly recommend not only Death Becomes Her by Graphic Audio but all of Michale Anderle's Kurtherian Universe. There are so many books not just in this particular series but off shoots of various characters from this series and even offshoots or those. Michale Anderle and his various co-authors have done an amazing job fitting all of these together in a way that keeps the time line going from character to character and place to place. I'm not ashamed to say that I own an amount of audiobooks from the Kurtherian Universe that I could only guess at the number without actually going through my library's to count them all!! The Graphic Audio versions are simply icing on an already delicious cake and I hope that in the future we will see a movie based on this series or perhaps a television series!

This title is due for release on November 1, 2020
We'll send you an email as soon as it is available!