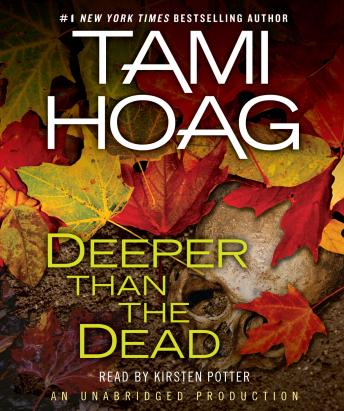 Deeper Than the Dead

When three children stumble on a shallow grave in 1984, an idyllic California community is rocked to its core. The victim is a young woman, her eyes and lips sealed closed, a blind and silent witness to an unspeakable crime. The third victim in two years’ time, it’s clear that a serial killer has come calling.

As a member of the FBI’s fledgling criminal profiling unit, Special Agent Tony Mendez knows serial killers. It quickly becomes apparent that the See-No-Evil killer is no ordinary psychopath. The profile paints a portrait of a man easily trusted, well respected, and intelligent—a man no one would suspect.

Dr. Peter Crane fits the bill. A pillar of the community, he volunteers at a center for disadvantaged women—a center the victims had all attended. Crane is also a beloved husband and father to a ten-year-old son, Tommy, who was one of the three children to discover the grave. Needing insight into Peter Crane’s world, Mendez asks Anne Navarre, Tommy’s fifth-grade teacher, to find out what she can. It’s a request Anne finds both intriguing and unethical—much like Mendez himself.

Then a new victim leads to a different suspect—a man whose son was another of the three children to find the grave but a man whose position in the community is also above reproach, a sheriff’s deputy. As the connections between the two families become increasingly tangled, it seems clear that one of these children holds the key to a serial killer’s double life . . . and a revelation of evil so dark, so deep, no one may survive.

I didnt think this was one of her better books.

I thought this was a very good book. it kept me guessing the whole time. I really enjoyed the narrator who is one of my favorite readers. I highly recommend this book. good reading!

This book would be fine if it didn't go on for so long. It could have used tighter editing as it rambles, and after awhile I felt that the author was hitting me over the head with how clever she was. I didn't finish it - I just didn't care anymore who the killer was or who the next victim was,

This title is due for release on December 29, 2009
We'll send you an email as soon as it is available!