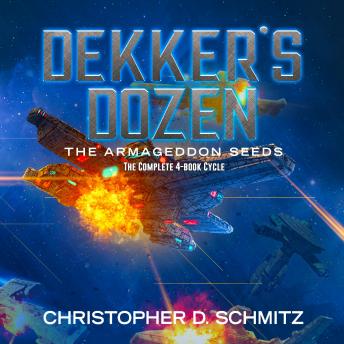 Dekker Knight has a secret past.

Vivian “Vesuvius” Briggs has a sword and a chip on her shoulder.

Together they run a crew of sanctioned space mercenaries: the Dozen.

During an operation gone wrong, an alien spy steals a seemingly insignificant item: a benign seed found on Ganymede. A secret cult believes it has immense power, perhaps coming from the Garden of Eden itself. If it falls into enemy hands, it could wreak unspeakable evil across the galaxy.

The Dozen fight to keep their debts settled, fuel in their ship, and some equilibrance to their moral ledger. They are more than mercenaries: they are part of a family they’ve chosen—and this seed threatens to tear it apart.

Between a corrupt government, and forces in league with the notorious villain, Prognon Austicon, threats squeeze them from every side. Dekker and Austicon have a vendetta. Vivian’s family and Austicon have a history. Austicon has powerful friends and a superweapon. With the fate of the universe hanging in the balance, can the Dozen swing the pendulum back?

This title is due for release on June 7, 2020
We'll send you an email as soon as it is available!