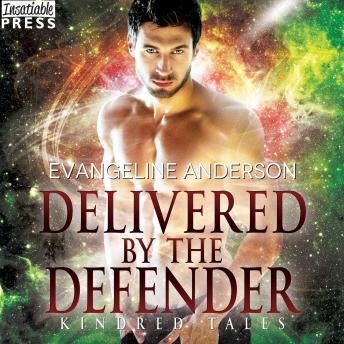 Delivered by the Defender: A Kindred Tales Novel

This is a Super-Plus Length Novel, almost 135,000 words longA woman alone on a dangerous planet, where females must have male protection to survive...A warrior intent on keeping his vow never to call a bride...When Selena is framed for a crime she didn't commit, can Valen save her?And will he lose his heart in the process?The Vampire and the Violinist...Selena Bates's ex was as boring as they come--entirely too vanilla for her adventurous tastes. Now she's getting a chance to visit a whole new planet where nobody is vanilla. On Ma'shorka Centra, all females are required to have a "Seal of Independence" prominently displayed, or a male Master who is responsible for keeping them in line. Unfortunately, Selena is single, but a girl can dream, can't she? And anyway, she's determined to have the adventure of a lifetime, playing her violin for the Emperor himself.Valen is a Defender--the Kindred version of a lawyer. He's also a Pitch-Blood Kindred--the only kind of Blood Kindred who actually needs to drink blood. Having taken a vow never to call a bride, he is intensely irritated to find that he is sitting next to a tempting, curvy Elite on the interstellar shuttle to Ma'shorka Centra. Determined to ignore her, he gives Selena the impression that he's a world-class jerk. However, when she gets attacked at the alien spaceport and her Seal of Independence is stolen, Valen comes to her rescue. But there's one big problem--without her Seal, she needs a "Master"-- and guess who has to step up and help her out?Valen is determined to keep his vow, no matter how tempting Selena is. But when she is framed by the vengeful Third Empress for a crime she didn't commit, only he can defend her in the crooked Ma'shorkan High Court. Will Selena have to serve her sentence of "a hundred thousand lifetimes of hard labor?" And will Valen be able to resist the tempting little Earth female?You'll have to read...Delivered by the Defender to find out.

This title is due for release on November 20, 2021
We'll send you an email as soon as it is available!