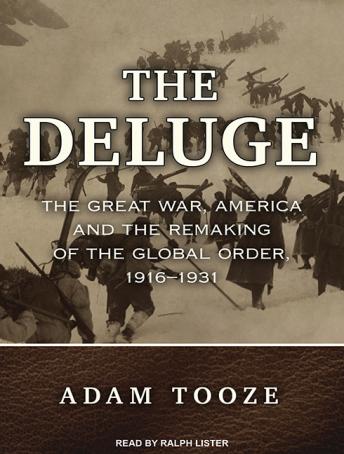 In the depths of the Great War, with millions dead and no imaginable end to the conflict, societies around the world began to buckle. The heart of the financial system shifted from London to New York. The infinite demands for men and materiel reached into countries far from the front. The strain of the war ravaged all economic and political assumptions, bringing unheard-of changes in the social and industrial order.

A century after the outbreak of fighting, Adam Tooze revisits this seismic moment in history, challenging the existing narrative of the war, its peace, and its aftereffects. From the day the United States entered the war in 1917 to the precipice of global financial ruin, Tooze delineates the world remade by American economic and military power. Tracing the ways in which countries came to terms with America's centrality-including the slide into fascism-The Deluge is a chilling work of great originality that will fundamentally change how we view the legacy of World War I.

This title is due for release on November 13, 2014
We'll send you an email as soon as it is available!