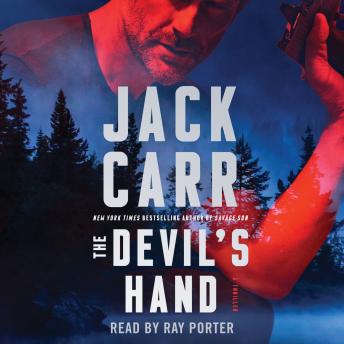 The Devil's Hand: A Thriller

“Take my word for it, James Reece is one rowdy motherf***er. Get ready!” —Chris Pratt, star of The Terminal List, coming to Amazon Prime

“They’re great, man. They lock you in. They’re gripping.” —Joe Rogan, on the Terminal List series

The fourth thriller in the “so powerful, so pulse-pounding, so well-written” (Brad Thor, #1 New York Times bestselling author) Terminal List series follows former Navy SEAL James Reece as he is entrusted with a top-secret CIA mission of retribution twenty years in the making.

It’s been twenty years since 9/11, two decades since the United States was attacked on home soil and set out to make the guilty pay with their lives. In the shadows, the enemy has been patient—learning, and adapting. And the enemy is ready to strike again.

A new president offers hope to a country weary of conflict. He’s a young, popular, self-made visionary…but he’s also a man with a secret.

Halfway across the globe a regional superpower struggles with sanctions imposed by the United States and her European allies, a country whose ancient religion spawned a group of ruthless assassins. Faced with internal dissent and extrajudicial targeted killings by the United States and Israel, the Supreme Leader puts a plan in motion to defeat the most powerful nation on earth.

Meanwhile, a young PhD student has gained access to a bioweapon thought to be confined to a classified military laboratory known only to a select number of officials. A second-generation agent, he has been assigned a mission that will bring his adopted homeland to its knees.

With Jack Carr’s signature “absolutely intense” (Chuck Norris) writing and “gripping authenticity” (The Real Book Spy), The Devil’s Hand is a riveting and timely thriller that will leave you gasping for breath.

Chilling and very suspenseful. I love the extra details to help the reader visualize the story. The narrator has done an awesome job with all of these books.

Jack Carr is a great writer and you can see the in depth research in his book.

Great job working with people the main character is beginning a new life with.

Way to much background info and weapon fetishes, national issues etc. Easy to lose the thread of the story.

Too much boring back story. Not enough story and story meh. No triller.

Not as good as the others in the series - just a little contrived feeling and edging on unrealistic in places. But...I still enjoyed it and will keep buying the series when they come out!

Another great book that is thrilling and keeps you wanting more!

A serious drop off from the first three books. Alot of vulgarity that was'nt in the others. When a writer gets lazy on his character and story developement they just have thier characters start dropping F-bombs as if that creates drama or impact. Enough of them in this book to make a Marine drill sergeant blush.

It was ok. Way too much technical desciption

Good book and makes you realize how easily an enemy could destroy the US. The one complaint was having the President being a Democrat and having the opposite position on about every current issue that the current Democrat Party has. They made the Republican Senator the villain when it was the Democrats who did everything in their power to bring down a sitting President.

I like that this is #2 of a 4-book collection. Rich details intertwine the books together. The topic has real world implications that are terrifying which leads me to consider what is going on behind the scenes of the current news stories. On to book #3.

another winner from Jack Carr! the narrator was genius as well. cant wait for the next one!

Another great novel by Jack Carr.

If I had not read the first three boos by this author I might would have given this a 5 star rating. I did enjoy the read but still hard to follow up with something as great as they were. R I really do enjoy the narration and it is Five star Thanks for the great and timely read