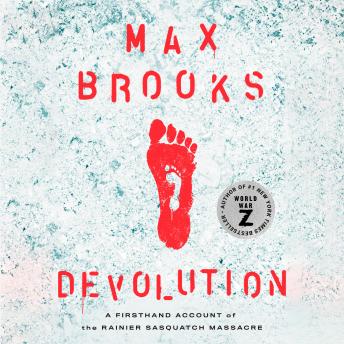 Devolution: A Firsthand Account of the Rainier Sasquatch Massacre

The #1 New York Times bestselling author of World War Z is back with “the Bigfoot thriller you didn’t know you needed in your life, and one of the greatest horror novels I’ve ever read” (Blake Crouch, author of Dark Matter and Recursion).

As the ash and chaos from Mount Rainier’s eruption swirled and finally settled, the story of the Greenloop massacre has passed unnoticed, unexamined . . . until now. The journals of resident Kate Holland, recovered from the town’s bloody wreckage, capture a tale too harrowing—and too earth-shattering in its implications—to be forgotten. In these pages, Max Brooks brings Kate’s extraordinary account to light for the first time, faithfully reproducing her words alongside his own extensive investigations into the massacre and the legendary beasts behind it. Kate’s is a tale of unexpected strength and resilience, of humanity’s defiance in the face of a terrible predator’s gaze, and, inevitably, of savagery and death.

Yet it is also far more than that.

Because if what Kate Holland saw in those days is real, then we must accept the impossible. We must accept that the creature known as Bigfoot walks among us—and that it is a beast of terrible strength and ferocity.

Part survival narrative, part bloody horror tale, part scientific journey into the boundaries between truth and fiction, this is a Bigfoot story as only Max Brooks could chronicle it—and like none you’ve ever read before.

“Delightful . . . [A] tale of supernatural mayhem that fans of King and Crichton alike will enjoy.”—Kirkus Reviews
(starred review)

“The story is told in such a compelling manner that horror fans will want to believe and, perhaps, take the warning to heart.”—Booklist (starred review)

This is a crazy story and I loved every minute of it. All the narrators are excellent.

A fantastic survival story that starts with a slow burn that gradually turns up the heat until the climactic final scene. The cast of narrators are great and really portray these characters with enthusiasm and heart. If I'm being honest I truly didn't like our characters at the start, but I believe that was the point. We have to give them the chance to grow into characters we care about, and the protagonist absolutely does that, at least for me.

I don’t think I’ve ever finished an audiobook so fast.

loved it...when is the movie coming out?

One of my favorite newer books! Starts slow but it’s a wild ride.

I would agree with the other reviewers regarding the slow start. The main character starts off with a voice that mirrors her persona, almost irritating . As her character matures so does her voice. You will need to get into the book by a third before you realize you are wrapped up in the narrative.It is worth the wait! A very entertaining book(maybe a movie?).

Struggled at the beginning couldn’t understand what was happening then it all came together. Narrator was a little annoying at first , but then got used to her voice. good book overall.

The narration was great, you can tell a lot of effort was put into it. Max Brooks does it again with another great read.

Such a great reader... this was very easy to immerse myself in the story and actually visualize the horrors

Eh. The premise was good, the fillers too thick and not interesting enough to capture my attention. Good reading crew!

Loved! Well done. I wish there was more. A very scary believable tale. Narrator was outstanding.

Good story, but the main female character’s voice is somewhat irritating. I realize that’s the way she’s written and so it’s not her fault, but still it’s so refreshing when the pivot to another character talking. I did appreciate the underlying theme that nature is harsh and that PC society is clueless.