Diary Of A Madman: The Geto Boys, Life, Death, and The Roots of Southern Rap 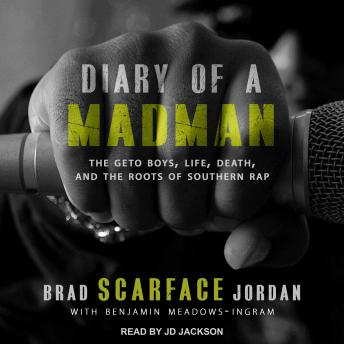 From Geto Boys legend and renowned storyteller Scarface, comes a passionate memoir about how hip-hop changed the life of a kid from the south side of Houston, and how he rose to the top-and ushered in a new generation of rap dominance. Scarface is the celebrated rapper whose hits include 'On My Block,' 'Mind Playing Tricks on Me' and 'Damn It Feels Good to be a Gangsta' (made famous in the cult film Office Space). The former president of Def Jam South, he's collaborated with everyone from Kanye West, Ice Cube and Nas, and had many solo hits such as 'Guess Who's Back' feat. Jay-Z and 'Smile' feat. Tupac. But before that, he was a kid from Houston in love with rock-and-roll, listening to AC/DC and KISS.

In Diary of a Madman, Scarface shares how his world changed when he heard Run DMC for the first time; how he dropped out of school in the ninth grade and started selling crack; and how he began rapping as the new form of music made its way out of New York and across the country. It is the account of his rise to the heights of the rap world, as well as his battles with his own demons and depression. Passionately exploring and explaining the roots and influences of rap culture, Diary of a Madman is the story of hip-hop-the music, the business, the streets, and life on the south side Houston, Texas.

Diary Of A Madman: The Geto Boys, Life, Death, and The Roots of Southern Rap