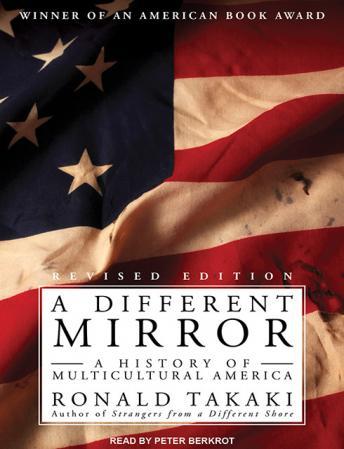 A Different Mirror: A History of Multicultural America

Upon its first publication, A Different Mirror was hailed by critics and academics everywhere as a dramatic new retelling of our nation's past. Beginning with the colonization of the New World, it recounts the history of America in the voice of the non-Anglo peoples of the United States-Native Americans, African Americans, Jews, Irish Americans, Asian Americans, Latinos, and others-groups who helped create this country's rich mosaic culture.

From the role of black soldiers in preserving the Union to the history of Chinese Americans from 1900 to 1941, from an investigation into the issue of 'illegal' immigrants from Mexico to a look at the sudden visibility of Muslim refugees from Afghanistan, Takaki's work is a remarkable achievement that grapples with the raw truth of American history and examines the ultimate question of what it means to be an American.

The audiobook is terrible because it does not let me select the chapters.

Very informative, easy to understand yet not Juvenal

Not overly sophisticated, but a great intro a lot of chapters in American history. He quotes many, many primary resources which is appreciated, but get ready for the common use of racial slurs. The only thing...is it me...or does the narrator try to copy the stereotypical accent of whoever he quotes? He does a southern black American accent, an Asian American accent, Irish American accent, etc. ....It comes off a little antiquated maybe? I would feel better if he just read each quote in his normal voice.