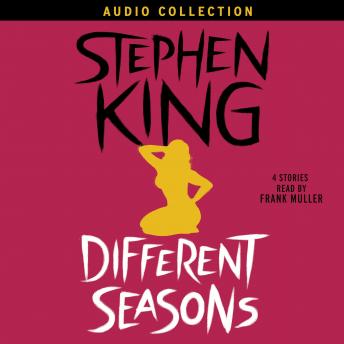 Includes the stories “The Body” and “Rita Hayworth and Shawshank Redemption”—set in the fictional town of Castle Rock, Maine

A “hypnotic” (The New York Times Book Review) collection of four novellas—including the inspirations behind the films Stand By Me and The Shawshank Redemption—from Stephen King, bound together by the changing of seasons, each taking on the theme of a journey with strikingly different tones and characters.

Next is “Apt Pupil,” the inspiration for the film of the same name about top high school student Todd Bowden and his obsession with the dark and deadly past of an older man in town.

In “The Body,” four rambunctious young boys plunge through the façade of a small town and come face-to-face with life, death, and intimations of their own mortality. This novella became the movie Stand By Me.

Finally, a disgraced woman is determined to triumph over death in “The Breathing Method.”

“The wondrous readability of his work, as well as the instant sense of communication with his characters, are what make Stephen King the consummate storyteller that he is,” hailed the Houston Chronicle about Different Seasons.

These are very good stories, Stephen King does another good job. The narrator was excellent!

Of all the Stephen King book I have read, this one ranks very high to me in the four stunning novellas. Each story is masterful in its own way and all have some of the best character creations that are memorable and so realistic. When you mix the quality of these stories with the amazing and award ainning reader that is Frank Muller, you have a combination that is pure joy to listen too. h

Another amazing king novel! All the stories are gripping and have great flow.. really make you think! Love the classic king novels. Also love listening to him talk about why and how he came up with these stories. The narrator was excellent.

4 stories in this book. I read Rita Hayworth and the Shawshank Redemption & The Body. They were both really good stories that held my interest. The narrator was amazing!