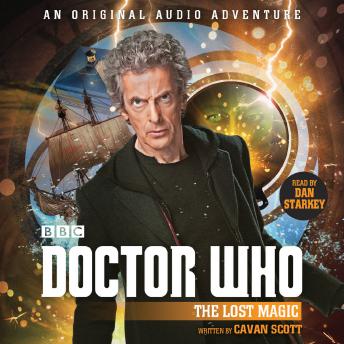 Dan Starkey reads an intriguing original story featuring the Twelfth Doctor, as played on TV by Peter Capaldi.
People laughed at John Dee for years, dismissing the astrologer as a madman or a fraud. Then one day a face appeared in his mirror, a face that was not his own. He was given secrets from beyond time: how to mix potions; how to tame the elements; even how to trap a demon. But Dee’s magic was lost, his library ransacked, his spells and hexes stolen. A dread prophecy was made: ”the Earth will burn”…
When the TARDIS lands on a Spanish galleon, caught in an unnatural storm, the Doctor, Alex and Brandon are shipwrecked and separated from each other. Between them they must discover who is waging supernatural war - before the planet is pulled apart. What connects John Dee with Sir Francis Drake and the impending attack of the Spanish Armada?
Dan Starkey, who plays the Sontaran Strax in the hit BBC TV series, reads this original audio story by Cavan Scott. Duration: 1 hour 5 mins approx