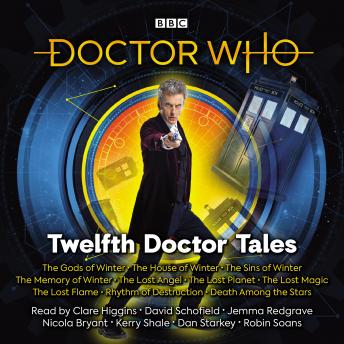 Jemma Redgrave, Clare Higgins, Nicola Bryant and Dan Starkey are among the readers of this exclusive collection of nine original audio adventures.

Join the Twelfth Doctor, as played on TV by Peter Capaldi, as he meets friends and enemies new and old on these journeys in Time and Space.

In the interlinked Winter quartet (The Gods of Winter, The House of Winter, The Sins of Winter and The Memory of Winter) the Doctor is served with a Calling Card that means he and Clara can be summoned for assistance at any time or place.

In the Lost quartet (The Lost Angel, The Lost Planet, The Lost Magic and The Lost Flame) the Time Lord becomes embroiled in a mystery involving the Weeping Angels and the Sisterhood of Karn.

In Rhythm of Destruction he encounters the deadliest jazz quartet in the universe, and in Death Among the Stars the Doctor sees some oddly familiar figures on Jupiter's sixth moon.

This title is due for release on December 2, 2021
We'll send you an email as soon as it is available!