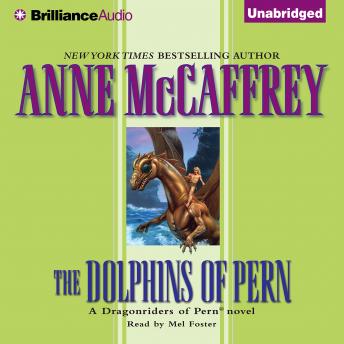 The Dolphins of Pern

When the first humans came to settle the planet Pern, they did not come alone: intelligence-enhanced dolphins also crossed the stars to colonize Pern’s oceans while their human partners settled the vast continents. But then disaster struck. The deadly silver spores called Thread fell like rain from the sky, and as human colonists’ dreams of a new, idyllic life shattered into a desperate struggle for survival, the dolphins were forgotten.

Now, centuries later, as the dragonriders of Pern prepare to complete the momentus task of ridding their world of Thread forever, T’lion, a young bronze rider, and his friend Readis, son of the Lord Holder of Paradise River Hold, make contact with the legendary “shipfish.” And as the dragonriders grapple with the end of an era, T’lion, Readis, and the dolphins face the start of a new one: reviving the bond between land- and ocean-dwellers – and resurrecting the dreams of the first colonists of Pern.

This title is due for release on December 29, 2008
We'll send you an email as soon as it is available!