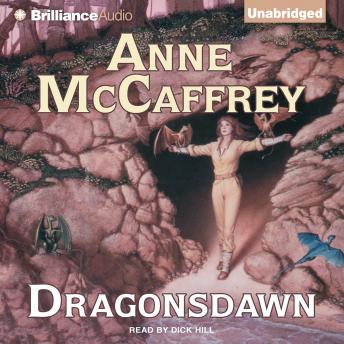 #9 of Dragonriders of Pern Series

The beautiful planet Pern seemed a paradise to its new colonists—until unimaginable terror turned it into hell. Suddenly deadly spores were falling like silver threads from the sky, devouring everything—and everyone—in their path. It began to look as if the colony, cut off from Earth and lacking the resources to combat the menace, was doomed.Then some of the colonists noticed that the small, dragonlike lizards that inhabited their new world were joining the fight against Thread, breathing fire on it and teleporting to safety. If only, they thought, the dragonets were big enough for a human to ride and intelligent enough to work as a team with a rider.…And so they set their most talented geneticist to work to create the creatures Pern so desperately needed—Dragons!

The book (McCaffrey) and the reading (Hill) were both first class. My only minor criticism is the "Irish" accent that some of the characters have. I get that these characters have Irish ancestors, but I had trouble understanding some of the words, and by the end of the book I was frustrated/unhappy about it. This in no way detracts from my total enjoyment of the Pern series (I've listened to 5 or 6 of them and plan to continue).

As a Huge science fiction fan, I was excited to start this series. Since this book is the first in the series, chronologically, I thought I'd give it a shot. It was acceptable and I think I might listen to others. The narrator had a nice voice, even though he couldn't properly speak with any accent that wasn't American. It's not as good as Tolkien, or the Dune series, but its good enough to pass the time.