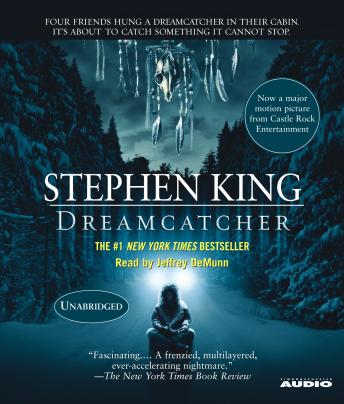 Once upon a time, in the haunted city of Derry, four boys stood together and did a brave thing. It was something that changed them in ways they could never begin to understand.
Twenty-five years after saving a Down's-syndrome kid from bullies, Beav, Henry, Pete, and Jonesy -- now men with separate lives and separate problems -- reunite in the woods of Maine for their annual hunting trip. But when a stranger stumbles into their camp, disoriented and mumbling something about lights in the sky, chaos erupts. Soon, the four friends are plunged into a horrifying struggle with a creature from another world where their only chance of survival is locked in their shared past -- and in the Dreamcatcher.

Not bad. I thought it was going to be like the movie, and it was to a certain extent. I enjoyed the book. Not as much as Stephen King's others I've purchased. Good none the less though.

Great storyline and enjoyed how they tied in events from previous books. Great range of characters and narrator was great.

I listened to this book before got a better understanding on it now. it was good. language had to go but good storyline. narrator did a good job.

one of my favorite steven king expeditions EVER!!! This story can gross you out or cause some anxiety though... the depth of his imagination is indisputable and so very unique

Love the story! Jeffrey DeMunn does a great job!

Pretty good listen, but often long on the details in the descriptions. Very gory, which I know many of his books are, but I prefer the ones with less actually gore, more suspense, more character development. I did like the tie ins with previous books, though.

one of my favorites

This book had been on my reading list for quite some time. I purchased it in a Barnes & Noble nearly 15 years ago, but I could never commit to reading it. Thankfully, I found it through audiobooks.com, and played it while at work. The story line was entertaining, and I think the narrator did a fine job with the New England and Southern dialects. He was very animated while reading the dialogue between each character. King was quite descriptive between the settings, characters, and action sequence. This book is another Stephen King classic, and a must-read for fans alike. Cheers!

I love Stephen King but Dreamcatcher felt like it dragged a bit. The characters were not as interesting as in King’s other novels. It was a pretty interesting plot but rather humdrum.

I thought it was a terrible book. The language was very offensive.

Fantastic novel... very entertaining. The story itself is beyond enthralling, not to mention the narrators talent to mimic each characters voice.

This title is due for release on March 1, 2003
We'll send you an email as soon as it is available!