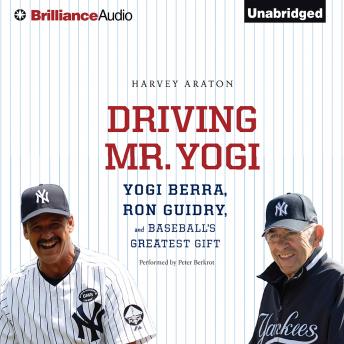 It happens every spring. Yankees pitching great Ron Guidry arrives at the Tampa airport to pick up Hall of Fame catcher and national treasure Yogi Berra. Guidry drives him to the ballpark. They watch the young players. They talk shop. They eat dinner together and tease each other mercilessly. They trade stories about the greats they have met along the way. And the next day they do the same thing all over again.As every former ballplayer can appreciate, in that routine, every spring, there emerges a certain magic.Driving Mr. Yogi is the story of how a unique friendship between a pitcher and catcher is renewed every year. It began in 1999, when Berra was reunited with the Yankees after a long self-exile, the result of being unceremoniously fired by George Steinbrenner fourteen years before. A reconciliation between Berra and the Boss meant that Berra would attend spring training again. Guidry befriended “Mr. Yogi” instantly. After all, Berra had been a mentor in the clubhouse back when Guidry was pitching for the Yankees. Guidry knew the young players would benefit greatly from Mr. Yogi’s encyclopedic knowledge of the game, just as Guidry had during his playing days. So he encouraged him to share his insights. Soon, an offhand batting tip from Mr. Yogi turned Nick Swisher’s season around. Stories about handling a hitter like Ted Williams or catching Don Larsen’s perfect game captured the players’ imagination. And in Yogi, Guidry found not just an elder companion or source of amusement—he found a best friend.

I like the content of the book but the narrator should do a little homework on pronouncing people’s names a lose the terrible voice imitations especially the Hispanic voices.... it was insulting.

This title is due for release on April 17, 2012
We'll send you an email as soon as it is available!