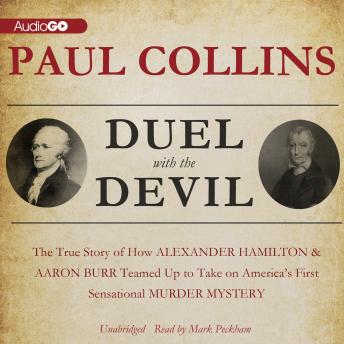 Duel with the Devil: The True Story of How Alexander Hamilton and Aaron Burr Teamed Up to Take on America’s First Sensational Murder Mystery

In the closing days of 1799, the United States was still a young republic, its uncertain future contested by the two major political parties of the day: the well-moneyed Federalists, led by Alexander Hamilton, and the populist Republicans, led by Aaron Burr. The two finest lawyers in New York, Burr and Hamilton were bitter rivals both in and out of the courtroom, and as the next election approached—with Manhattan likely to be the swing district on which the presidency would hinge—their animosity reached a fever pitch. Until, that is, a beautiful young woman was found floating in Burr's newly constructed Manhattan Well. The accused killer, Levi Weeks, was the brother of an influential architect with ties to both men, and the crime quickly became the most sensational murder in the history of the young nation. With the entire city crying for Levi's head, the young man was in danger of being hastily condemned without a proper hearing. And so America's two greatest attorneys did the unthinkable—they teamed up.