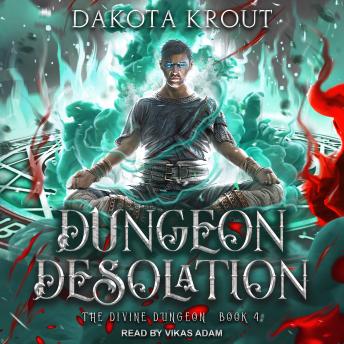 Auras empowering the body to superhuman status. Invocations tearing the land asunder. The war has arrived.

The necromantic armies are on the warpath and nowhere is safe-even the sanctuary of the flying dungeon has been threatened. The leadership of nearly all the sentient races has been wiped out, and only the people most suited to repelling the advancing darkness have an intact monarchy.

Cal learns quickly that the primary threat is not the far-off war, but the actions of those entrusted with protecting the population. As it turns out, the idea of using a flying dungeon as a war machine is very tempting indeed.

Dale has been facing his trials better than anyone could have hoped for, but when the war takes a turn for the worse, his role is forcibly relinquished. Since his only chance at survival is painful and rapid advancement, Dale must learn if his strength of will can develop into strength of flesh.

The distance between the Heavens and the Earth might not be so far after all.

This is a fun series. I am blowing through these books. Id enjoy if this was an anime

Fantastic series and very imaginative. Love the details in these books!