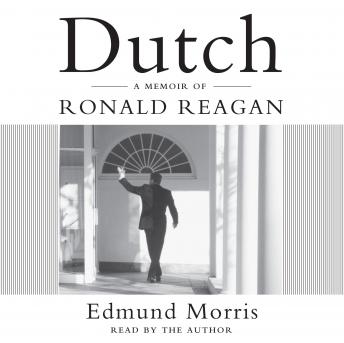 Dutch: A Memoir of Ronald Reagan

This book, the only biography ever authorized by a sitting President--yet written with complete interpretive freedom--is as revolutionary in method as it is formidable in scholarship. When Ronald Reagan moved into the White House in 1981, one of his first literary guests was Edmund Morris, the Pulitzer Prize-winning biographer of Theodore Roosevelt. Morris developed a fascination for the genial yet inscrutable President and, after Reagan's landslide reelection in 1984, put aside the second volume of his life of Roosevelt to become an observing eye and ear at the White House.

Coming and going with Reagan's benign approval ("I'm not going to ride up San Juan Hill for you"), Morris found the President to be a man of extraordinary power and mystery. Although the historic early achievements were plain to see--the restoration of American optimism and patriotism, a repowering of the national economy, a massive arms buildup deliberately forcing the "Evil Empire" of Soviet Communism to come to terms--nobody, let alone Reagan himself, could explain how he succeeded in shaping events to his will. And when Reagan's second term came to grips with some of the most fundamental moral issues of the late twentieth century--at Bitburg and Bergen-Belsen, at Geneva and Reykjavík,publicly outside the Brandenburg Gate ("Mr. Gorbachev, tear down this wall!"), and deep within the mother monastery of the Russian Orthodox Church, Morris realized that he had taken on a subject of epic dimensions.

Thus began a long biographical pilgrimage to the heart of Ronald Reagan's mystery, beginning with his birth in 1911 in the heart of rural Illinois (where he is still remembered as "Dutch," the dreamy son of an alcoholic father and a fiercely religious mother) and progressing through the way stations of an amazingly varied career: young lifeguard (he saved seventy-seven lives), aspiring writer, ace sportscaster, film star, soldier,union leader, corporate spokesman, Governor, and President. Reagan granted Morris full access to his personal papers, including early autobiographical stories and a handwritten White House diary.

The pilgrimage climaxes in 1993, when, in a moment of aching poignancy, Morris escorts his aged and failing subject back up the stairs of his birthplace. "An odd, Dantesque reversal of roles had occurred, as if I were now the leader rather than the led."

During thirteen years of obsessive archival research and interviews with Reagan and his family, friends, admirers and enemies (the book's enormous dramatis personae includes such varied characters as Mikhail Gorbachev, Michelangelo Antonioni, Elie Wiesel, Mario Savio, François Mitterrand, Grant Wood, and Zippy the Pinhead), Morris lived what amounted to a doppelgänger life, studying the young "Dutch," the middle-aged "Ronnie," and the septuagenarian Chief Executive with a closeness and dispassion, not to mention alternations of amusement, horror,and amazed respect, unmatched by any other presidential biographer.

This almost Boswellian closeness led to a unique literary method whereby, in the earlier chapters of Dutch: A Memoir of Ronald Reagan,Morris's biographical mind becomes in effect another character in the narrative, recording long-ago events with the same eyewitness vividness (and absolute documentary fidelity) with which the author later describes the great dramas of Reagan's presidency, and the tragedy of a noble life now darkened by dementia.

"I quite understand," the author has remarked, "that readers will have to adjust, at first, to what amounts to a new biographical style. But the revelations of this style, which derive directly from Ronald Reagan's own way of looking at his life, are I think rewarding enough to convince them that one of the most interesting characters in recent American history looms here like a colossus."

This title is due for release on January 24, 2012
We'll send you an email as soon as it is available!