The Early Christianity and the First Christians 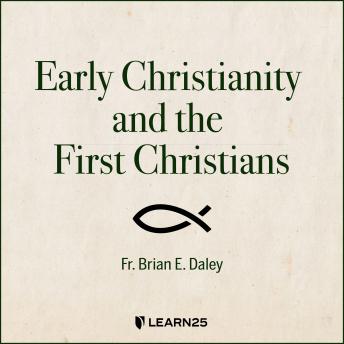 The winner of the “Nobel Prize of Theology” guides you into the world of the first Christians to explore the circumstances, faith, and ideas that indelibly shaped Christianity.

In this bestselling audio series by world-renowned patristic scholar Professor Brian E. Daley, S.J., you will encounter the first Christians and the beginnings of our Church. You’ll examine the social and religious settings of the first Christian communities, the concerns that dominated their thinking, and the literary and liturgical forms in which they expressed their faith.

You will explore Christianity from the time of the Apostles through the writings of Origen in the first half of the 3rd century. You’ll begin with a consideration of the world in which the earliest Christians lived: the Roman Empire. Next, you’ll explore the forms of authority developed in different parts of the Christian world and the formation of a distinctive Christian Biblical canon. After following the proliferation of Christian apocrypha, you’ll reflect on the attitudes of Hellenistic philosophers toward the new religion and learn about the first Christian philosopher to claim that title: Justin Martyr.

Through this eye-opening course, you will learn about the ideas and thinkers who shaped our faith, gave us our biblical canon, and have inspired Christians for almost 2,000 years.

Early Christianity and the First Christians

This title is due for release on August 21, 2008
We'll send you an email as soon as it is available!