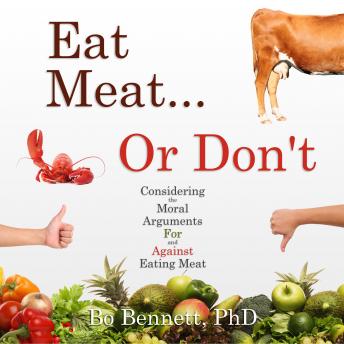 Eat Meat... or Don't: Considering the Moral Arguments For and Against Eating Meat

Roughly 95% of Americans don't appear to have an ethical problem with animals being killed for food, yet all of us would have a serious problem with humans being killed for food. What does an animal lack that a human has that justifies killing the animal for food but not the human? As you start to list properties that the animal lacks to justify eating them, you begin to realize that some humans also lack those properties, yet we don't eat those humans. Is this logical proof that killing and eating animals for food is immoral? Don't put away your steak knife just yet.

In Eat Meat... Or Don't, we examine the moral arguments for and against eating meat with both philosophical and scientific rigor. This book is not about pushing some ideological agenda; it's ultimately a book about critical thinking. But moral facts shouldn't be confused with ideology. When it comes to moral choices, there are better ones, and there are worse ones. If you act rationally and ethically and have adopted a good moral framework, you might come to the justified conclusion that eating meat is unethical... or you might not. Regardless of your conclusion, you will almost certainly realize that eating less meat is a fantastic idea for your health, the environment, and especially animals, and it's an easily achievable goal that will change your life for the better.

Eat Meat... or Don't: Considering the Moral Arguments For and Against Eating Meat

This title is due for release on July 20, 2019
We'll send you an email as soon as it is available!