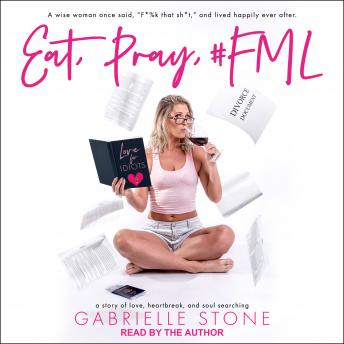 A year and a half into our marriage, I found out my husband had been having an affair with a nineteen-year-old for six months. I filed for divorce and left.

Two weeks later I met a man, and we fell madly in love. It was a fairy-tale romance for a month and a half, and he convinced me to join him on a romantic month-long vacation in Italy. Forty-eight hours before we were supposed to get on a plane, he told me he needed to go by himself. I was devastated. So, I had a decision to make. Either stay home and be heartbroken, or go travel Europe for a month by myself. And staying at home heartbroken? F%*k. That.

What does a woman do when her life has fallen apart and her heart has been ripped out and stepped on twice in two months? She goes on a wild adventure, makes some bad decisions, and does a sh*t load of soul searching. But most importantly? She finds out how to love . . . herself.

This is so not Eat, Pray, Love.

I recently, cough, tried to read, girl wash your face, cuz so much hype surrounded it, as a female I felt obligated just to see what was all the fuss. I was met with so much social monotonous bs that I literally traded the book in for another read before I got over half way through it. This book makes that book wet its pants. I found it extremely refreshing, in a non societal conformed way. I loved every second of it.

I binged this audio book in one day and restarted today it's well written and speaks to so many different parts of my life, I never rate anything but I will for this book, any other books written by Gabrielle stone and can't wait for book 2, thank you for being my inspiration ❤️

absolutely loved it! authentic to no end!

A good book and funny as well

I think whether you’re a young girl finding your way or in your late 30s like me this book is inspiring. It’s not always easy to have faith in yourself or love yourself first. This book and Gabrielle’s words make you feel like you’re right there with her, finding yourself and having “thought onions” also. Your listening to her stories while contemplating your own And saying “f*ck yeah” when you decide you’re a badass woman right along with her. Most of all this book reminds you that you are worth it. Whatever that means for anyone...you are worth it.

I really enjoyed this!

I really enjoyed this book, especially all the details!

Narrator is very animated and entertaining, as I would expect from an Author/Narrator. The excessive use of the word F*** was unappealing. Story was ordinary.

Such a great story and read for anyone going through something similar! Every part of the story is relatable and intriguing, I finished in 4 days!

Used the F word way to much.