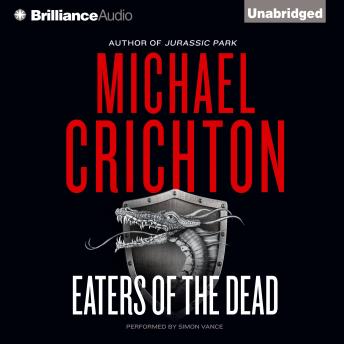 Eaters of the Dead

The year is A.D. 922. A refined Arab courtier, representative of the powerful Caliph of Baghdad, encounters a party of Viking warriors who are journeying to the barbaric North. He is appalled by their Viking customs—the wanton sexuality of their pale, angular women, their disregard for cleanliness…their cold-blooded human sacrifices. But it is not until they reach the depths of the Northland that the courtier learns the horrifying and inescapable truth: he has been enlisted by these savage, inscrutable warriors to help combat a terror that plagues them—a monstrosity that emerges under cover of night to slaughter the Vikings and devour their flesh.…Eaters of the Dead was adapted to the screen as The 13th Warrior, starring Antonio Banderas.

Amazing book had me on edge the whole way. felt transported to a different era

Not so much scary but intriguing. I really enjoyed it.

slow start but turns to good read as 13th warrior watch movie first books are always better. narrator does a good job too.

At first I did not think I was going to like it. As the story went in it was very good. The narration was great. Interesting book about Vikings.

Absolutely fascinating. The author blends, semlessly true historical events with that of wild faciful fiction that harkens back tales of Beowulf.