The Egyptian Book of the Dead: The Papyrus of Ani in the British Museum 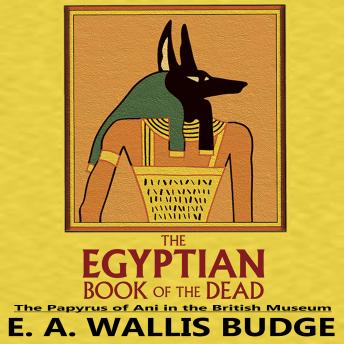 The Egyptian Book of the Dead is unquestionably one of the most influential books in all of history. Embodying a ritual to be performed for the dead, with detailed instructions for the behaviors of the disembodied spirit in the Land of the Gods, it served as the most important repository of religious authority for some 3,000 years. Chapters were carved on the pyramids of the ancient fifth dynasty, texts were written in papyrus, and selections were painted on mummy cases well into the Christian Era.
In a certain sense, it stood behind all Egyptian civilization. In the year 1888, Dr. E. Wallis Budge, then purchasing agent for the British Museum, followed rumors he heard of a spectacular archaeological find in Upper Egypt, and found in an 18th Dynasty tomb near Luxor 'the largest roll of papyrus I had ever seen, tied with a thick band of papyrus, and in a perfect state of preservation'. It was a copy of The Egyptian Book of the Dead, written around 1500 BC for Ani, royal scribe of Thebes, overseer of the granaries of the lords of Abydos, and scribe of the offerings of the lord of Thebes. This Papyrus of Ani, a full version of the Theban recension, is presented here by Dr. Budge, who later became perhaps the world's most renowned Egyptologist.
Reproduced in full are a clear copy of the Egyptian hieroglyphs, an interlinear transliteration of their sounds (as reconstructed), a word-for-word translation, and separately a complete, smooth translation. All this is preceded by an introduction. As a result of this, the listener has a unique opportunity to savor all aspects of the Book of the Dead, or as it is otherwise known, The Book of the Great Awakening.

Egyptian Book of the Dead: The Papyrus of Ani in the British Museum

This title is due for release on June 26, 2019
We'll send you an email as soon as it is available!