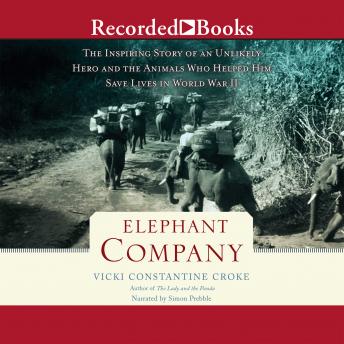 Elephant Company: The Inspiring Story of an Unlikely Hero and the Animals Who Helped Him Save Lives in World War II

J.H. 'Billy' Williams always had an affinity for animals. So, when he responded to a job offer with the East India Company to work with logging elephants his family wasn't surprised, though they were worried. He had already come back from World War I in one piece; would he be so lucky with India? Not only did he find his calling with the elephants in India, Billy and his elephants became war heroes. At the onset of World War II, Williams formed Elephant Company and was instrumental in defeating the Japanese in Burma and saving refugees, including on his own 'Hannibal Trek.' Billy Williams became a media sensation during the war, telling reporters that the elephants did more for him than he was ever able to do for them, but his story has since been forgotten. Part biography, part war story, and part wildlife adventure, Croke delivers an utterly charming narrative and an important, little-known piece of the legacy of World War II. Vicki Constantine Croke has been covering pets and wildlife for more than two decades. She has anchored NECN-TV's 'The Secret Life of Animals' and wrote the Boston Globe's 'Animal Beat' column for 13 years.

Book has been out for some time....but sure a new find for me. And I hope it reemerges as a popular read. It's well worth the read regardless of the passage of time!! I just bought a hard-copy for my grandson. The story leads to its military history sitting but the joy and edification for our human experiences really arises from the wonderful detailed story of living and learning in the world of elephants by an extraordinary man.

Amazing read! I highly recommend. Straight forward, wonderful storytelling, and fascinating true story! I laughed, I cried, I had all the feels about the elephants. By the end, I felt like I knew and loved Bandoola myself. What an amazing and heroic man Jim/Elephant Bill was. I never had Burma/Myanmar on my travel list but I’m putting it there now - would love to see their elephants in the wild. I’ve told everyone at my work about this book. A great read - appropriate for older children up!

I have been in the teak trade for 25 years and quite familiar with Northern Myanmar . I was very impressed with the accuracy of the smallest of details relating to teak and elephants.

Amazing story which I will never forget! Bill Williams is a true hero on many levels- caring for and saving elephants, improving their lives and then the brace and treacherous journey to rescue civilians and elephants from the Japanese during WWII. Highly recommend!

What a terrific listen! I really liked this book and i fell in love with the main character Billy Williams and his elephants . I couldnt stop listening to the story. A very very inspiring true story. He was a real man and a hero. I will look for more on this man & his lifes story. If only men , all of us, could understand and care for animals like this man did. The narrator was very good and easy to listen too. This book is in my top 10 books. I bought two books to give as gifts to my son and my husband. They love it too.

Loved it and listened twice

One of the best reads I have had in a long time!

So interesting, I learned so much about Elephants & the hardships of the war. The Narrator was excellent

Informative and entertaining. The narrator was easy to understand and possesses the voice and diction of a skilled orator.

Great story of elephants and how smart and amazing they are. Elephant Bill was such a great person. He did so much for elephants. I learned a lot about my favorite animal. The narration was great as well.

I really liked this story. There was lots to learn in the story. It was well written.

This title is due for release on September 26, 2014
We'll send you an email as soon as it is available!