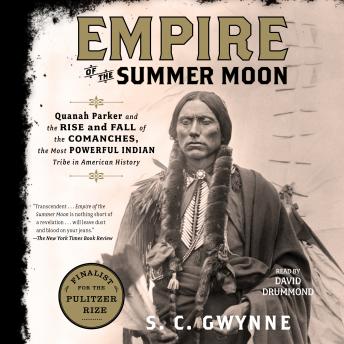 Empire of the Summer Moon: Quanah Parker and the Rise and Fall of the Comanches, the Most Powerful Indian Tribe in American History

This New York Times bestseller and stunning historical account of the forty-year battle between Comanche Indians and white settlers for control of the American West “is nothing short of a revelation…will leave dust and blood on your jeans” (The New York Times Book Review).

Empire of the Summer Moon spans two astonishing stories. The first traces the rise and fall of the Comanches, the most powerful Indian tribe in American history. The second entails one of the most remarkable narratives ever to come out of the Old West: the epic saga of the pioneer woman Cynthia Ann Parker and her mixed-blood son Quanah, who became the last and greatest chief of the Comanches.

Although readers may be more familiar with the tribal names Apache and Sioux, it was in fact the legendary fighting ability of the Comanches that determined when the American West opened up. Comanche boys became adept bareback riders by age six; full Comanche braves were considered the best horsemen who ever rode. They were so masterful at war and so skillful with their arrows and lances that they stopped the northern drive of colonial Spain from Mexico and halted the French expansion westward from Louisiana. White settlers arriving in Texas from the eastern United States were surprised to find the frontier being rolled backward by Comanches incensed by the invasion of their tribal lands.

The war with the Comanches lasted four decades, in effect holding up the development of the new American nation. Gwynne’s exhilarating account delivers a sweeping narrative that encompasses Spanish colonialism, the Civil War, the destruction of the buffalo herds, and the arrival of the railroads, and the amazing story of Cynthia Ann Parker and her son Quanah—a historical feast for anyone interested in how the United States came into being.

Hailed by critics, S. C. Gwynne’s account of these events is meticulously researched, intellectually provocative, and, above all, thrillingly told. Empire of the Summer Moon announces him as a major new writer of American history.

A wretched book that promotes old tropes about "savage", "uncivilized" Indians. Far better is Pekka Hamalainen's amazing _The Comanche Empire_ for its depth and sensitivity. By contrast, Gwynne's book reads like a bad Cormac McCarthy novel.

A fantastic page turner and detailed glimpse into a brief history of the Plains Indians of the hill country region of Texas, Better known as the Comancheria, to Oklahoma. Sullivan Ross ,( my great grandfather), one of the great heroes of TEXAS, that is highly unknown the first sitting governor in the capitol building that sits today in Austin Texas in the savior of Cynthia parker from captivity. But the big story is the Comanche Indian tribe the great plains Indian, vicious, the civilized, apathetic, intelligent. This book is Quanah

Comprehensive and historically accurate book on the Comanches.

This audiobook was amazing I sat parked in my driveway after getting home to finish whatever chapter I was on. The only thing I would say is that the book has disturbingly graphic violent first hand accounts, a couple of times I was literally sick to my stomach but it really happened and should be included.

One of the best book ever to me. I listened to audio version, and to be honest, never wanted it to stop! Absolute fantastic piece of historic literature!

good book audiobook to have and to listen to,

Great book. If you are from Texas, you will love this book as many present day towns in Texas and Oklahoma are used as references.

Why wasn't this taught in school?

All I can say is Wow! Great book! Ive lived in Texas all my life and learned things I never knew. For example that Cynthia Ann Parker was buried (the first time) just a few miles from my farm in East Texas! Many other amazing and interesting facts about the Comanche Indians, Texas Rangers and Texas History.

If you’re a student of Texas history , Comanche history, Indian culture or any of the above....this book is for you. I do wish the Narrator had taken the time to learn to pronounce certain nouns. The Pecos River (or town) is NOT pronounced PEEcOhs, rather it is pronounced PAYcus. There were many other blunders uttered by the narrator as far as Texas nouns are concerned. Makes me wonder what was fumbled trying to pronounce Comanche nouns. Outside of that, it was educational, enjoyable, and even sad. Good book

very informative and had me attentively listening. learned a lot more than I thought I would