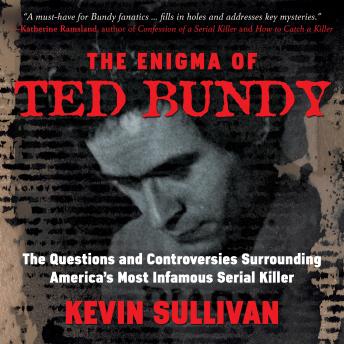 The Enigma of Ted Bundy: The Questions and Controversies Surrounding America's Most Infamous Serial Killer

If you want a view into the world that lies behind the Ted Bundy murders, this last work in a series of six books on Bundy is definitely for you. For within this audiobook you will find many questions still surrounding this fascinating and intricate case, as well as the answers that are only now being provided here. There's so much more to learn, and new information is still surfacing about Bundy, his victims, and his potential victims. As such, there is new testimony included from those who had a brush with the killer, and others who played their own roles in this multistate case.

You will also hear from Bundy case detectives Jerry Thompson of Salt Lake City, Utah, and Don Patchen of Tallahassee, Florida, as they tell of their experiences with Bundy. So does Ron Holmes, the Louisville criminologist who worked with Ted Bundy towards the end of his life. Holmes not only gives accurate details about Ted Bundy but other serial killers as well. On top of this, it contains some very important official reports that have rarely been seen outside of the archives, and there will be commentary to guide listeners through it. This audiobook also makes available Bundy's final confession to Utah detective Dennis Couch, made only hours before the killer's death, where Bundy reveals some startling facts and sparks some additional questions as well. All in all, The Enigma of Ted Bundy is an enlightening journey into this most infamous case.