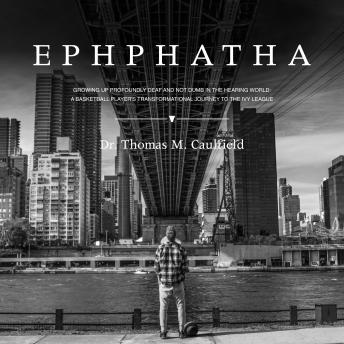 EPHPHATHA: GROWING UP PROFOUNDLY DEAF AND NOT DUMB IN THE HEARING WORLD: A BASKETBALL PLAYER'S TRANSFORMATIONAL JOURNEY TO THE IVY LEAGUE

For two decades a father kept a secret journal documenting the life of his only son, Christopher, who was born profoundly Deaf. He had a simple dream of someday presenting that journal to Christopher as a special gift from father to son. But as each new challenge was surmounted, it became clear Christopher Caulfield's story had to be shared.Ephphatha, which means "to be opened," follows Christopher's transformational journey through the unimaginable obstacles he faced during his young life. Whose right is it to choose the intervention strategies that will help you be your best? How do you keep going when adults and children can be so unkind? Can you make yourself understood when no one around you has experienced what you are facing?Christopher's support came from those in his life who did open up. His chances for success on and off the basketball court also hinged on hard work, faith, and his own undeniable inner fortitude to never give up.By the time he was nine years old he had already completed 1,500 hours of speech therapy. That same dedication led him to be a Division I college basketball recruit before he reached high school. He may not have set any records being invited to birthday parties growing up, but with Ephphatha, you'll be rooting for Christopher all the way to the Ivy League!

EPHPHATHA: GROWING UP PROFOUNDLY DEAF AND NOT DUMB IN THE HEARING WORLD: A BASKETBALL PLAYER'S TRANSFORMATIONAL JOURNEY TO THE IVY LEAGUE

This title is due for release on March 11, 2019
We'll send you an email as soon as it is available!