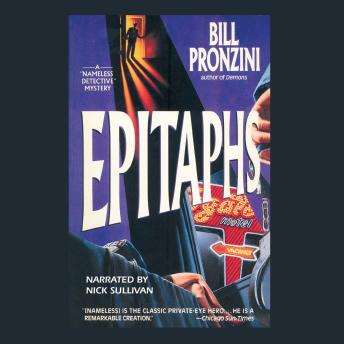 So what if Nameless can't get his girlfriend, Kerry, to marry him? So what if he can't talk his partner, Eberhardt, out of his bitter funk? Skies are sunny, and the Nameless Detective wants them to stay that way. So he decides to do an old man a favor and find his missing granddaughter, Gianna. But no one said it would be easy. It seems Gianna's roommate is turning tricks, and Nameless' search quickly leads him to a pimp, a murder, and into a dark pit of human perversion-the kind of place where people die. What happen to Gianna Fornessi? Ask Nameless: he's the one gripping his .38 and writing epitaphs in his head ...

"Nameless is a wonderfully realized, evolving protagonist. His adventures don't get any better than this--at least until the next one."--Booklist

This title is due for release on August 1, 2004
We'll send you an email as soon as it is available!