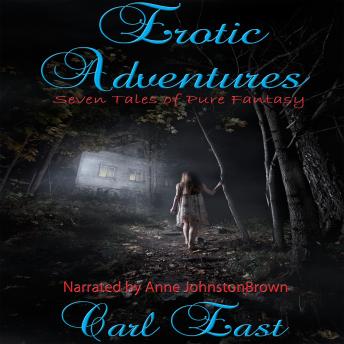 The Stories in this bundle are as follows:The Sorceress and Her Apprentice When Cherry narrowly escapes being raped, she finds herself lost in the woods and so begins her incredible adventure. With sorcerers and magic along with Cyclops and vampires, plus various other magical creatures, her life is about to change forever. Alex in Wonderland (An Erotic Parody) Does Wonderland really exist? Alex is about to find out when he encounters a white rabbit wearing a waistcoat. His curiosity compels him to follow where the rabbit leads, and it leads him into the adventure of a lifetime. Down into the rabbit hole he goes, finding that most doors will open if you have the right key. Fairy Lore Brandon's survived the fighting in Afghanistan and upon his return is ready to enjoy reading in his favorite place in the world. It's a spot near his mountain home that he calls Fairy Hollow. However, what he witnesses there will change his life for ever. The Cursed Geraldine is a good witch. At least, she'd like to think she's a good witch. She just has a naughty side to her. She's also not like other witches, as she uses the magic of the mind instead of dark magic. She's recently found a way to get rich quick, by getting paid to remove curses and is having the time of her life. Bound to Hell Dale is struggling to get through college, but something is about to happen that will make college irrelevant. With the aid of a Succubus he's about to take on the role of the monster killing Reaper and his life will never be the same again. Soul Mates When Arianna (an angel in training) has to go out into the world to earn her wings, by saving a soul, she has no idea what awaits her. Brandy is a succubus and she's on the run. She disobeyed Satan's orders. When they both find one another, the strangest alliance you can ever imagine forms and a friendship is born. Erotic Paranormal Activity Angela is a freelance investigative journalist, who is trying to ascertain whether ghosts truly exist or not. Until now, she's been opened minded about the entire quest. However, she's yet to find any positive proof. Then, she gets the chance to stay in a house that others won't go near. What she finds is both eye opening and mind blowing. These tales are graphic in nature and are intended for adults only. All characters depicted are 18 or older. Enjoy

This title is due for release on January 14, 2019
We'll send you an email as soon as it is available!