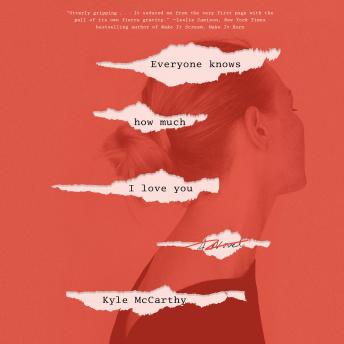 Everyone Knows How Much I Love You: A Novel

In this “tale of toxic friendship at its most riveting” (People), a young woman finds herself inexorably drawn to repeating the worst mistakes of her past.

“Masterly, mendacious, and a total thrill ride . . . Not since a certain Mr. Ripley have I been so consumed in another’s covetous desires.”—Justin Torres, bestselling author of We the Animals

At age thirty, Rose is fierce and smart, both self-aware and singularly blind to her power over others. After moving to New York, she is unexpectedly swallowed up by her past when she reunites with Lacie, the former best friend she betrayed in high school. Captivated once again by her old friend’s strange charisma, Rose convinces Lacie to let her move in, and the two fall into an intense, uneasy friendship.

While tutoring the offspring of Manhattan’s wealthy elite, Rose works on a novel she keeps secret—because it stars Lacie and details the betrayal that almost turned deadly. But the difference between fiction and fact, past and present, begins to blur, and Rose soon finds herself increasingly drawn to Lacie’s boyfriend, exerting a sexual power she barely understands she possesses, and playing a risky game that threatens to repeat the worst moments of her and Lacie’s lives.

Sharp-witted and wickedly addictive, Everyone Knows How Much I Love You is a uniquely dark entry into the canon of psychologically rich novels of friendship, compulsive behavior, and the dangerous reverberations of our actions, both large and small.