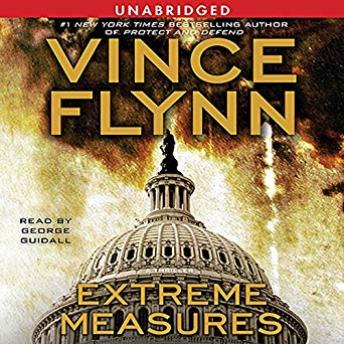 #1 New York Times bestselling phenomenon Vince Flynn delivers a white-knuckled rollercoaster ride of a novel featuring “the best hero the thriller genre has to offer” (The Real Book Spy) as Mitch Rapp wages a war against a new enemy with the help of a fellow soldier as dedicated—and as lethal—as they come.

Counterterrorism operative Mitch Rapp and his colleague Mike Nash may have finally met their match. The CIA has intercepted two terrorist cells, but a third—led by a dangerous mastermind determined to become al-Qaeda’s new leader—is believed to be on the loose. With such a terrifyingly deadly enemy out there, Rapp needs the best of the best by his side and he believes he has that with Nash.

Together, they have made careers out of meeting violence with extreme violence and have never wavered in the top-secret fight against the war on terrorism. Both have been forced to lie to virtually every single person they care about, and both have soldiered on with the knowledge that their lethal tactics have saved thousands of lives. But certain leaders on Capitol Hill are pushing to have men like Rapp and Nash put on a short leash. And then one spring afternoon in Washington, DC, everything changes.

With nonstop action and ripped-from-the-headlines writing, Extreme Measures is the political thriller of our time and proves once again that, “in the world of black-ops thrillers, Mitch Rapp continues to be among the best of the best” (Booklist, starred review).

Best narrator in the business. I only enjoy listening to books he reads

Good book. Love the series all together. A few skips in the audio.

once more, great storyline with attention to detail

Great book with twists that keep your attention throughout the book. I enjoyed the narrators ability to change from characters and keep a consistent rhythm.

Extreme measures wasn't as good as Consent to kill. I know it was a book, but it seemed to have a ton of dialogue in it as opposed to action like Extreme measures. None the less, it was a good book and kept my attention most of the time.

One of the best Mitch Rapp (character) books in the series.

This title is due for release on October 21, 2008
We'll send you an email as soon as it is available!