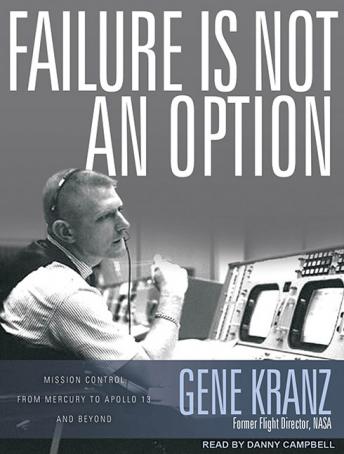 Failure Is Not an Option: Mission Control from Mercury to Apollo 13 and Beyond

Gene Kranz was present at the creation of America's manned space program and was a key player in it for three decades. As a flight director in NASA's Mission Control, Kranz witnessed firsthand the making of history. He participated in the space program from the early days of the Mercury program to the last Apollo mission, and beyond. He endured the disastrous first years when rockets blew up and the United States seemed to fall further behind the Soviet Union in the space race. He helped to launch Alan Shepard and John Glenn, then assumed the flight director's role in the Gemini program, which he guided to fruition. With his teammates, he accepted the challenge to carry out President John F. Kennedy's commitment to land a man on the moon before the end of the 1960s.

Kranz was flight director for both Apollo 11, the mission in which Neil Armstrong fulfilled President Kennedy's pledge, and Apollo 13. He headed the Tiger Team that had to figure out how to bring the three Apollo 13 astronauts safely back to Earth. (In the film Apollo 13, Kranz was played by the actor Ed Harris, who earned an Academy Award nomination for his performance.)

In Failure Is Not an Option, Gene Kranz recounts these thrilling historic events and offers new information about the famous flights. What appeared as nearly flawless missions to the moon were, in fact, a series of hair-raising near misses. When the space technology failed, as it sometimes did, the controllers' only recourse was to rely on their skills and those of their teammates. Kranz takes us inside Mission Control and introduces us to some of the whiz kids-still in their twenties, only a few years out of college-who had to figure it all out as they went along, creating a great and daring enterprise. He reveals behind-the-scenes details to demonstrate the leadership, discipline, trust, and teamwork that made the space program a success.

Finally, Kranz reflects on what has happened to the space program and offers his own bold suggestions about what we ought to be doing in space now.

This is a fascinating firsthand account written by a veteran mission controller of one of America's greatest achievements.

A wonderful insight into the early years of NASA

Excellent view from inside mission control at a very human level.

I thought this book was awesome. I have recommended it to many of my friends.

An interesting insight into the space race and how we got from the ground to the moon.

A great perspective of the space race by a key player.

This book was very good. Very entertaining as well as educational. If you have interest in books about man's race to space you will enjoy this book.

Great book. Well written and well narrated. I grew up during this period and the story telling was excellent and kept my interest, even though I already knew the way it would end. I was also very pleased with the way he handled the Apollo 13 mission. He stayed true to the story as he saw it and didn't embellish beyond his own participation. Well played.