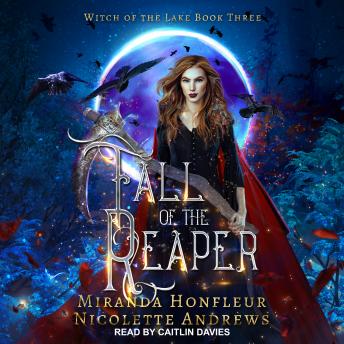 Fall of the Reaper

After her life nearly fell apart, Brygida finally knows her place: away from the village, with her mothers, healing the slumbering wood to keep the nightmares at bay. Her family grimoire warns that the wood may never be allowed to wake, and she claims that duty for her own. Her mind does turn to the new lord of Rubin, but wishing for more almost lost her everything, and she's not about to lose her witchlands to its nightmares caused by the villagers. That is, until the dreaded cult arrives . . .

Kaspian has never wanted the rulership, but when his father passes away, he has no choice but to ascend to lord. With tensions high between the village and the witches, trust lacking between him and his subjects, and a heavy heart turned toward the wood, Kaspian can't help but wish for someone to take it all away . . . And then a familiar face from his past comes to grant it.

The cult arrives to cleanse the so-called stain of witchcraft upon Rubin, and it won't stop until Brygida and her mothers are dead. But with demons closing in and the wood ready to wake, the cult's violence could destroy not only the region of Rubin, but everything. Can Brygida and Kaspian stem the dark tide of the cult together, or will they and their people drown in the mortal inevitability of blood, demons, and a waking wood with an insatiable hunger?

I enjoyed this final book in the Witch of the Lake series. Loved the vivid descriptions of the settings and all of the fantastical creatures and beings as Brygida must defeat the cult which is trying to destroy her people and Kaspian's town. In the process, Kaspian and Brygida finally find their way to each other. Recommended for anyone who enjoys fantasy, mythical creatures and a great adventure.

what an amazing series I absolutely loved it. So worth reading and/or listening to.