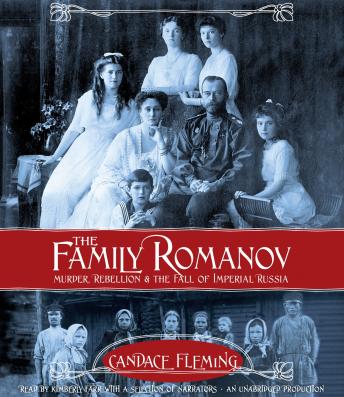 The Family Romanov: Murder, Rebellion, and the Fall of Imperial Russia

“[A] superb history.... In these thrilling, highly readable pages, we meet Rasputin, the shaggy, lecherous mystic...; we visit the gilded ballrooms of the doomed aristocracy; and we pause in the sickroom of little Alexei, the hemophiliac heir who, with his parents and four sisters, would be murdered by the Bolsheviks in 1918.” —The Wall Street Journal

Here is the tumultuous, heartrending, true story of the Romanovs—at once an intimate portrait of Russia's last royal family and a gripping account of its undoing. Using captivating photos and compelling first person accounts, award-winning author Candace Fleming (Amelia Lost; The Lincolns) deftly maneuvers between the imperial family’s extravagant lives and the plight of Russia's poor masses, making this an utterly mesmerizing read as well as a perfect resource for meeting Common Core standards.

'An exhilarating narrative history of a doomed and clueless family and empire.' —Jim Murphy, author of Newbery Honor Books An American Plague and The Great Fire

'For readers who regard history as dull, Fleming’s extraordinary book is proof positive that, on the contrary, it is endlessly fascinating, absorbing as any novel, and the stuff of an altogether memorable reading experience.' —Booklist, Starred

'Marrying the intimate family portrait of Heiligman’s Charles and Emma with the politics and intrigue of Sheinkin’s Bomb, Fleming has outdone herself with this riveting work of narrative nonfiction that appeals to the imagination as much as the intellect.' —The Horn Book, Starred