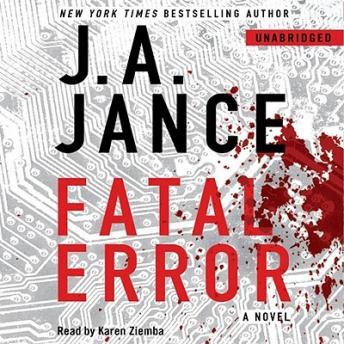 When an old friend is accused of murdering a sociopath who courted women over the Internet only to steal all of their money, Ali Reynolds steps in to investigate in this white-knuckled mystery from the New York Times bestselling author of The A List.

Ali Reynolds begins the summer thinking her most difficult challenge will be surviving a six-week-long course as the lone forty-something female at the Arizona Police Academy—not to mention taking over the 6 a.m. shift at her family’s restaurant while her parents enjoy a long overdue Caribbean cruise. However, when Brenda Riley, a colleague from Ali’s old news broadcasting days in California, shows up in town with an alcohol problem and an unlikely story about a missing fiancé, Ali reluctantly agrees to help.

The man posing as Brenda’s fiancé is revealed to be Richard Lowensdale, a cyber-sociopath who has left a trail of broken hearts in his virtual wake. When he is viciously murdered, the women he once victimized are considered suspects. The police soon focus their investigation on Brenda, who is already known to have broken into Richard’s home and computer before vanishing without a trace. Attempting to clear her friend’s name, Ali is quickly drawn into a web of online intrigue that may lead to a real-world fatal error.

This wasn't the best of the books I've read by JA Jance. It didn't really tie together well. The beginning (I don't want to give anything away) didn't make any sense - maybe she's setting up for another book. The reader is beginning to grate on my nerves. She tends to raise her voice in the middle of a sentence like she's asking a question (sounds like a teenage girl). She also over-dramatizes in places where it's not necessary. I do like the characters Jance has created (Ali and her family and friends), but this plot seemed a bit thin.

This title is due for release on February 1, 2011
We'll send you an email as soon as it is available!