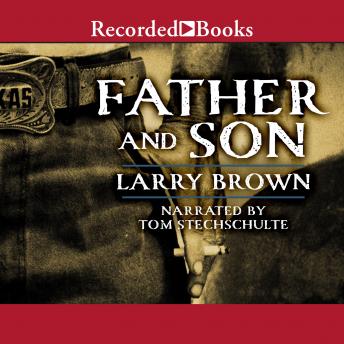 Larry Brown, a remarkable literary voice from the South, is a veteran of the Vietnam War and spent 17 years as a firefighter. Distilling his experiences, he has developed a deep understanding of the darker forces at work in men's souls. In novels like Joe and On Fire he has astounded critics and earned critical acclaim from many authors including John Grisham and Pat Conroy. Father and Son follows a bad seed, Glenn Davis, who is deeply flawed and dangerous. After serving several years in prison, Glenn has returned to his rural Mississippi home, not sure what he wants or needs. Over the course of five days, he forges a path of destruction, and violence that finally leads him to Sheriff Bobby Blanchard, who is everything Glenn is not. Larry Brown wraps the listener up in the searing conflict between these two opposites. But from their inevitable stand-off, he skillfully spins them into unpredictable directions and reactions. The stunning conclusion, swelling with unexpected notes of peace and hope, resonates with Brown's powerful talent.

As mentioned by others...this book is slow. It s l o w l y unwinds the vile turpitude pervasive in 1968 rural Mississippi. Because of that slow, sinuous looping you actually feel stifled by the heat, revolted by the stink, heart broken by the desperation and the poverty, and scared as hell of the relentless rage that is harbored by others. The slow unraveling of the complicated relationships between the characters - some you will want to protect, others you will want to smother yourself. The extended uncoiling right up to the inevitable end - I think these characters will occupy my mind for some time.

Awesome book. It’s very well written with rich characters. Some you will love and some you will hate. It’s slow paced but well worth sticking with and enjoying getting to know the characters and their lives.

Excellent, a great and beautiful book. Tom Stechschulte is a wonderful reader. Larry Brown is a national treasure.

This title is due for release on June 20, 2008
We'll send you an email as soon as it is available!