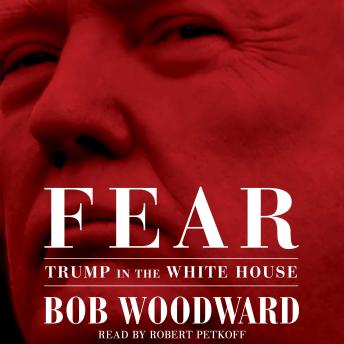 Fear: Trump in the White House

THE INSIDE STORY ON PRESIDENT TRUMP, AS ONLY BOB WOODWARD CAN TELL IT

Fear is the most intimate portrait of a sitting president ever published during the president’s first years in office. The focus is on the explosive debates and the decision-making in the Oval Office, the Situation Room, Air Force One and the White House residence.

Fear presents vivid details of the negotiations between Trump’s attorneys and Robert Mueller, the special counsel in the Russia investigation, laying out for the first time the meeting-by-meeting discussions and strategies. It discloses how senior Trump White House officials joined together to steal draft orders from the president’s Oval Office desk so he would not issue directives that would jeopardize top secret intelligence operations.

“It was no less than an administrative coup d’état,” Woodward writes, “a nervous breakdown of the executive power of the most powerful country in the world.”

Horrible and full of lies

Very insightful ... and frightening. I'm more frightened now about Trump's access to "the button," especially in light that he plans to contest the presidential election that he's certain to lose. I can only hope that those that realize how dangerous, juvenile, stupid, and sociopathic he is have (secretly) changed the codes.

I feel like I just finished part one of two of a Marvel movie.... when does the second movie come out! I'm dying to know what happens!

For any lover of history this is a really good book. The author explains the timeline very well without making you feel the material is over your head. You don’t have to be an expert of ancient times to appreciate Alexander the Great’s ambition and conquests. Def recommend.

Excellent read of a most tragic presidency

redundant on a lot of concepts re: the man in the white house

Believable and riveting. The narration was great.

Amazing to read the specifics of how these events shape the administration.

Bob Woodward has done an excellant job at putting togther ths book concerning the early days of the Trump Presidency. It was a great read and the Narration was excellant! One of the most enjoyable books I ever listened to.

Great work from a very credible and respected journalist.

Most of the material is not new. It showed many of the things we’ve been seeing on tv. But it’s a good read.

If you follow the news, you don't need that book! A waste of time.