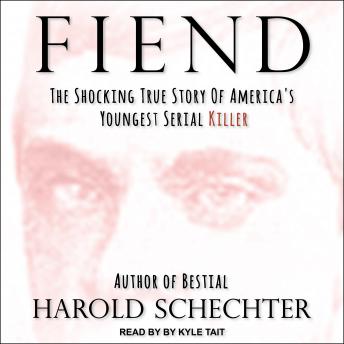 A monster preyed upon the children of nineteenth-century Boston. His crimes were appalling-and yet he was little more than a child himself.

When fourteen-year-old Jesse Pomeroy was arrested in 1874, a nightmarish reign of terror over an unsuspecting city came to an end. 'The Boston Boy Fiend' was imprisoned at last. But the complex questions sparked by his ghastly crime spree-the hows and whys of vicious juvenile crime-were as relevant in the so-called Age of Innocence as they are today.

Jesse Pomeroy was outwardly repellent in appearance, with a gruesome 'dead' eye; inside, he was deformed beyond imagining. A sexual sadist of disturbing precocity, he satisfied his atrocious appetites by abducting and torturing his child victims. But soon, the teenager's bloodlust gave way to another obsession: murder.

Harold Schechter, whose true-crime masterpieces are 'well-documented nightmares for anyone who dares to look' (Peoria Journal Star), brings his acclaimed mix of compelling storytelling, brilliant insight, and fascinating historical documentation to Fiend-an unforgettable account from the annals of American crime.