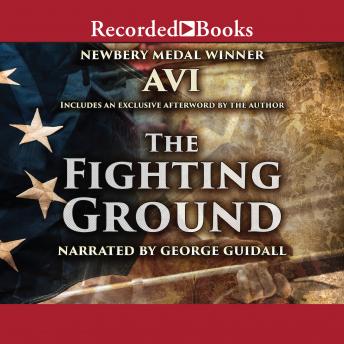 Jonathan's older brother is away fighting with General Washington in Pennsylvania. But at 13, Jonathan is too young to fight. Still too young. Then one morning, April 3, 1778, the tavern bell sounds, calling men to arms. Eager to prove his mettle, with blood pounding in his ears, Jonathan joins the gathering men at the tavern to hear the news. With a 12 pound, six-foot-long flintlock musket loaned to him by the tavern keeper, Jonathan finds a place in with the other men, marching to battle. Then the moment arrives-the distant sound of drums and the terrible whine of the fife. As the troops march into view, Jonathan sees 30 soldiers-all moving in perfect formation, a bayonet at every waist. 'Hessians,' the man next to Jonathan said. 'Hessians.' Avi is author of the Newbery-winner The True Confessions of Charlotte Doyle. In The Fighting Ground he recounts one unforgettable day in the life of young Jonathan, a naive New Jersey farmboy eager for war.