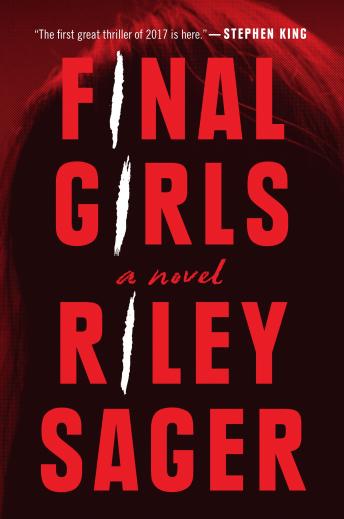 THE NATIONAL AND INTERNATIONAL BESTSELLER

“If you liked Gone Girl, you’ll like this.”—Stephen King

Ten years ago, six friends went on vacation. One made it out alive….

In that instant, college student Quincy Carpenter became a member of a very exclusive club—a group of survivors the press dubbed “The Final Girls”: Lisa, who lost nine sorority sisters to a college dropout's knife; Sam, who endured the Sack Man during her shift at the Nightlight Inn; and now Quincy, who ran bleeding through the woods to escape the massacre at Pine Cottage. Despite the media's attempts, the three girls have never met.

Now, Quincy is doing well—maybe even great, thanks to her Xanax prescription. She has a caring almost-fiancé; a popular baking blog; a beautiful apartment; and a therapeutic presence in Coop, the police officer who saved her life. Her mind won’t let her recall the events of that night; the past is in the past…until the first Final Girl is found dead in her bathtub and the second Final Girl appears on Quincy's doorstep.

Blowing through Quincy's life like a hurricane, Sam seems intent on making her relive the trauma of her ordeal. When disturbing details about Lisa's death emerge, Quincy desperately tries to unravel Sam's truths from her lies while evading both the police and bloodthirsty reporters. Quincy knows that in order to survive she has to remember what really happened at Pine Cottage.

Because the only thing worse than being a Final Girl is being a dead one.

I went into this novel thinking it was going to be a horror slasher, but it's more a story of survival after a massacre. Not a lot happens in the first half of the story and it's boring. It has a really great thriller premise and could have been much better. I didn't like ANY of the characters, especially Quincey. She makes a lot of stupid, dangerous decisions. The last quarter of the novel was quick and entertaining with a lot of surprises. However, the ending doesn't make a lackluster book fantastic.

No clue how how this book was only rated 3 1/2 stars. It's a great read. Most books in this genre are super predictable; this is full of twists. I now listen to audiobooks while running and I ran more this week than I have in months, because I wanted to keep going with this book. Great read!

amazing. sager is such a talented writer

This book had me sending the kids to bed early just so I could keep listening. Toggling between the present and Pine Cottage kept it interesting and me on the edge of my seat. Highly recommend! Oh, and that ending! Did NOT see that coming!

One of my favorite books and love the author

I really liked this book. I finished it in two days. I really liked the flashbacks to the cabin, listening to that night play out was very "90's Slasher Movie"-ish and I really liked it. That throw back feel meshed well with with mystery and suspense of the present day stuff. The narrator was also good.

I really enjoyed the twists and turns. It kept me engaged the whole time. I usually listen to audio books at work, but had to finish this one at home.

Took a risk on this suggestion, and I wasn't disappointed!

It took 2 days to listen to this book and I feel like I expected more. When it was over I felt a little disappointed. Maybe it dragged to long or maybe something was missing but in the end it was just ok for me.