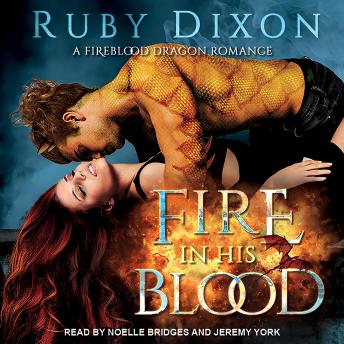 Fire In His Blood

Years ago, the skies ripped open and the world was destroyed in fire and ash. Dragons-once creatures of legend-are the enemy. Vicious and unpredictable, they rule the skies of the ruined cities, forcing humanity to huddle behind barricades for safety.

Claudia's a survivor. She scrapes by as best as she can in a hard, dangerous world. When she runs afoul of the law, she's left as bait in dragon territory. She only has one chance to survive-to somehow 'tame' a dragon and get it to obey her.

Except the dragon that finds her is as wild and brutal as any other . . . and he's not interested in obeying.

Such a sllllooooooooooow start. Not sure how I feel about the narrators... Tip: if you can't stand the word 'cunt' this book isn't for you.

Pretty good I liked the storyline I thought it was interesting and seductive.

Nope nope and nope. This is just too stereotypical for me. The concept is interesting but the delivery is bleh. I like the narration but that is about it.

Liked the narrators, the storyline was interesting, it's a shame that it doesn't devote more time to the more political and social aspects. I know it's light-romance, but still...

It is very stimulating.

The story is good the main character got on my nerves with the her indecisive. The story could have had a little more action or more of a plot twist. But I enjoyed the book and ready for the next book. I love the male dragon….hot.

Way to much narrative, restated head thinking too many different ways. More sex scenes than plot development. The bookended and nothing happened I the story after chapter three.

Not one of my favorite Ruby Dixon books. Felt it to be a little long without very much world building. But it kept me entertained. My main complaint was the female’s character’s logic. “You didn’t ask me?” Well how was he supposed to explain things if you couldn’t communicate and he is of a different species so will not view things the same way. Narrators we’re good.

Not bad at all.

The steamy sex scenes are so hot! The story kind of drags out for a bit but there are moments of hilarity when they try to communicate with each other before they bond. The book is well thought out and written so precisely that there is little room to wonder what or where the story will go. The narrator Noelle Bridges has such an expressive tone I really enjoyed listening to her. I have added Noelle to my 5 star narrators because of her story telling. Jeremy York is his normal suave self and I always enjoys the books he narrates.

Um, so this was in the top bad audiobooks I’ve stumbled upon. The narrator (Noelle) is the worst narrator I’ve had the displeasure of listening to. She literally makes a full, lengthy stop at every sentence. It was excruciatingly painful. The poor Jeremy York did his best (he gets the 1 star) for the little he did and I pitied him having to read such poor, contemptible writing. This felt like it was written by a 15 year old that has poor reading background. The maturity levels were subzero and the language levels were ..conversational rather than literary. The main character was stupid and annoying and dense, the bitchy tone narrating did NOT help, the sexual scenes came off as a bad porno routine (say the dirty words, cliche sequence, say the same dirty words again, use the least vocabulary possible). I miss the Anne Rice days where sexual fantasy could be tacky, yes, but had personality and had stuff actually going on. Could not finish, abandoned at chapter 30. (I tried, I really did)

This book is okay. The main girl is actually so annoying. She acts like she doesn’t know that the dragon obviously isn’t going to hurt her. She is so stupid it’s painful.

cant get enough of this book and the series.

Overall this book is very enjoyable. I did find that the main Character was at time unrealistic in their reasoning of some situations, but that is my own interpretation. I am starting on book two and look forward to more from this series. I also really love the woman narrator. I have listened to other she has done and I really love enjoy her telling of her parts of the story.

Fire in his Blood is a good book it kept my interest. It definitely makes dragons sexy as hell.

Ummm, this story could have been expanded upon without all the gratuitous sex scenes. Was just meh.