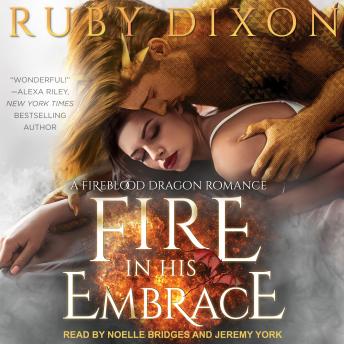 Fire In His Embrace

There's only one way to tame a dragon.

Emma Arroyo knows this. She also knows that the big golden dragon captured by her brother's biker gang is in trouble, and it's all her fault. He followed her scent, and now his life is in danger.

She has to fix this, somehow. If she could talk to the dragon, they could form a plan to escape, both of them. But the dragon's mind is wild and full of uncontrollable, killing rage. There's no reasoning with him.

There's certainly no freeing him, not when he's like this. But Emma can't leave without him. There's only one way to solve this problem-a mating. When Emma approaches Zohr to claim him as hers, she realizes just what it means to be a dragon's mate, and how much she's in over her head . . .

And she learns how fiercely possessive a drakoni male can be.

A slightly different approach to the story with this book but still the intrigue keeps the reader interested. Finally a female takes control of the mating and the story goes on. Thoroughly enjoyable plot. The narrators continues to be compelling with their performance.

cant get enough of this book.

Interesting mix of dystopian world and dragon shifters. Story lines seem a little similar, but still good and the relationships between the lead characters are sweet.

This title is due for release on December 14, 2017
We'll send you an email as soon as it is available!