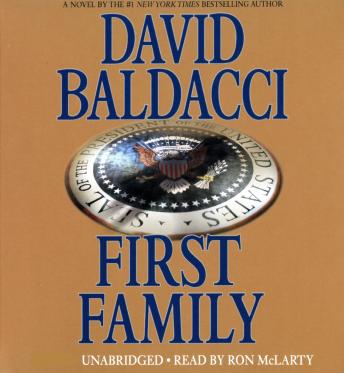 In this #1 New York Times bestseller, a child is kidnapped at a presidential retreat and two former Secret Service agents must become private investigators in a desperate search that might destroy them both.

A daring kidnapping turns a children's birthday party at Camp David, the presidential retreat, into a national security nightmare.

Former Secret Service agents turned private investigators Sean King and Michelle Maxwell don't want to get involved. But years ago Sean saved the First Lady's husband, then a senator, from political disaster. Now the president's wife presses Sean and Michelle into a desperate search to rescue a kidnapped child. With Michelle still battling her own demons, the two are pushed to the limit, with forces aligned on all sides against them-and the line between friend and foe impossible to define...or defend.

The book was fine. This is the third or fourth book I’ve downloaded that has skipping or audio problems.

I just discovered this writer and if this is an example, he is now one of my favorites! Loved the story, the pace, the narrator!

Love the narrator, but this book has deviated from the main characters. It’s fine but not the best continuation of the series.

Good read but as someone else noted, too much skipping was very distracting

I enjoyed the book, however there were a number of audio issues. Lots of dead space, skips, etc. I also didn't enjoy the background animation, including gunshots, explosions, etc. I would have liked just the narrator reading the story. That said, the story was great and the author has written a very nice book. I'm enjoying the King and Maxwell series.

well written plenty of intriguing questions that draw you in

I agree with Phillip. The book skipped throughout the playback. This has happen in the past and I want a credit. Listening to the story was frustrating. I am considering a switch to Audible!

I thought this was a fabulous book. The story line was suspenseful and keep me hooked. I couldn't stop listening to it.

I enjoyed this entire series. He is a Great Author. very suspensful and detailed keeps you interested and entertained.

Never before have I felt such sympathy towards the antagonist in a book! The author really knew how to tie your feelings in knots. I actually found myself rooting for the "villain"!

Absolutely horrible. It may be an excellent reading book but audio no - I don't like the he said she said stuff plus it was difficult to follow

While I have liked other Baldacci novels, I thought that the storyline in the early part of the novel was slow and plodding. If you agree when you listen, keep listening because the pace picks up and the story moves more quickly and the author pulls the various narrative threads together.

totally enjoyed this book and series. I would suggest reading them in order if possible

It held my interest, but it wasn't difficult to get out of the car whenever I reached my destination.

I am just half way through this but this is Baldacci at his best; and he is one of the great ones.

This title is due for release on April 21, 2009
We'll send you an email as soon as it is available!