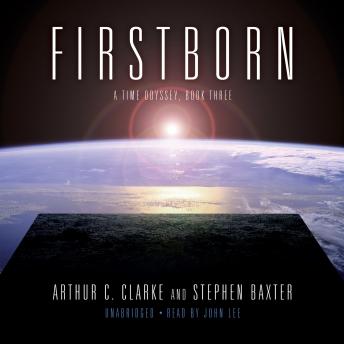 #3 of The Time Odyssey Series

The Firstborn—the mysterious race of aliens who first became known to science fiction fans as the builders of the iconic black monolith in 2001: A Space Odyssey—have inhabited legendary science fiction master Sir Arthur C. Clarke’s writing for decades. With Time’s Eye and Sunstorm, the first two books in the acclaimed Time Odyssey series, Clarke and his brilliant coauthor, Stephen Baxter, imagined a near future in which the Firstborn seek to stop the advance of human civilization by employing a technology indistinguishable from magic.

Their first act was the Discontinuity, in which Earth was carved into sections from different eras of history, re-stitched into a patchwork world, and renamed Mir. Mir’s inhabitants included such notables as Alexander the Great, Genghis Khan, and United Nations peacekeeper Bisesa Dutt. For reasons unknown to her, Bisesa entered into communication with an alien artifact of inscrutable purpose and godlike power—a power that eventually returned her to Earth. There, she played an instrumental role in humanity’s race against time to stop a doomsday event: a massive solar storm triggered by the alien Firstborn, designed to eradicate all life from the planet. That fate was averted at an inconceivable price. Now, twenty-seven years later, the Firstborn are back.

This time, they are pulling no punches. They have sent a “Q-bomb.” Speeding toward Earth, it is a device that human scientists can barely comprehend, that cannot be stopped or destroyed—and that will obliterate Earth.

Bisesa’s desperate quest for answers sends her first to Mars and then to Mir, which is itself threatened with extinction. The end seems inevitable. But as shocking new insights emerge about the nature of the Firstborn and their chilling plans for mankind, an unexpected ally appears from light-years away.

Very grateful for the clear time and effort put in on the recording of this. Great narrator, clear, bright vocals and brought the characters to life. As for the book I love all these thoughts and themes but the repetition of parts of the text from previous books was made more obvious by my blatting through them in a couple of weeks and I thought the imagination of the plot fell short of the best Arthur C. Clarke stories. I enjoyed it, I'd enjoy the series but I wouldn't recommend it as an entry point to his work. Try Childhood's End or 2001 A Space Odyssey