Five Lieutenants: The Heartbreaking Story of Five Harvard Men Who Led America to Victory in World War I 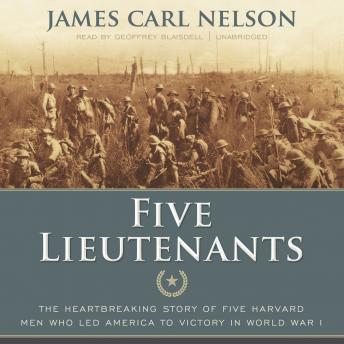 The dramatic true story of five brilliant young soldiers from Harvard, this is a thrilling tale of combat and heroism.
Five Lieutenants tells the story of five young Harvard men who took up the call to arms in the spring of 1917 and met differing fates in the maelstrom of battle on the western front in 1918. Delving deep into the motivations, horrific experiences, and ultimate fates of this Harvard-educated quintet-and by extension, of the brilliant young officer class that left its collegiate and postcollegiate pursuits to enlist in the army and lead America's rough-and-ready doughboys-Five Lieutenants presents a unique, timeless, and fascinating account of citizen soldiers at war and of the price these extraordinary men paid while earnestly giving all they had in an effort to end "the war to end all wars."
Drawing on the subjects' intimate, eloquent, and uncensored letters and memoirs, this is a fascinating microcosm of the American experience in the First World War and of the horrific experiences and hardships faced by the educated class of young men who were relied upon to lead doughboys in the trenches and, ultimately, in open battle.

Five Lieutenants: The Heartbreaking Story of Five Harvard Men Who Led America to Victory in World War I

This title is due for release on November 13, 2012
We'll send you an email as soon as it is available!