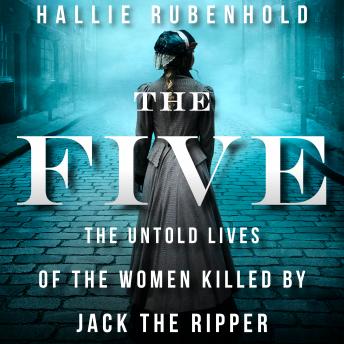 The Five: The Untold Lives of the Women Killed by Jack the Ripper

Five devastating human stories and a dark and moving portrait of Victorian London-the untold lives of the women killed by Jack the Ripper.

Polly, Annie, Elizabeth, Catherine, and Mary-Jane are famous for the same thing, though they never met. They came from Fleet Street, Knightsbridge, Wolverhampton, Sweden, and Wales. They wrote ballads, ran coffee houses, lived on country estates; they breathed ink-dust from printing presses and escaped people-traffickers. What they had in common was the year of their murders: 1888. The person responsible was never identified, but the character created by the press to fill that gap has become far more famous than any of these five women.

For more than a century, newspapers have been keen to tell us that 'the Ripper' preyed on prostitutes. Not only is this untrue, as historian Hallie Rubenhold has discovered, but it has prevented the real stories of these fascinating women from being told. Now, in this devastating narrative of five lives, Rubenhold finally sets the record straight, revealing a world not just of Dickens and Queen Victoria, but of poverty, homelessness, and rampant misogyny. They died because they were in the wrong place at the wrong time-but their greatest misfortune was to be born a woman.

Love this book! It’s about time the victims have their stories told. I love that the focus wasn’t in the gruesome details but more on the lives of these poor women..

I enjoyed getting to know the victims through this writer. It gives insight into the culture that inevitably doomed these women from the start.

The book achieved its goal which was to focus on the women rather than the crimes and the criminal. Ultimately it was an interesting look at the difficulties of the working class in Victorian England.

The background story in the lives of 5 very innocent women who were killed by Jack the Ripper. History I had been taught led me to believe they were prostitutes. The horrors of living in abject poverty were brought to light. Excellent narration. Riveting history that was well researched.

Excellent story telling. Reads like a novel more than a historical account, each woman is remarkably fleshed out given the sometimes limited records on each. I really do wish this would become a genre in itself. I read true crime and watch true crime shows, and it’s very rare that we get a story about the victims lives that lead them to cross paths with the killer. Narrator was excellent. Pleasant voice, emotive enough so the material never felt dry.

Hard to understand the narrator. Also not familiar with the meaning of some words used in this time period. To much detail on everything. Was bored frequently and just wanted to get to the lives of the victims more quickly. Finally gave up on this book

This was my first audiobook experience and it was fantastic. The stories of the forgotten women are so well researched. There were a couple of times when the authors words about these destitute women brought tears to my eyes. The narrators voice and cadence were absolutely wonderful. Truly a great find.

It was ok. It was long but got through it.

i was deeply touched by the stories of yhese women, ever over looked and misreported. very impreseed by the amount of information the author gathered to tell their stories. i learned a lot, and appreciated the author's modern critique of true crime.